This I guarantee: You know the “Seven Mountain Mandate.”

You’ve read about it online. You’ve watched it on the news. You’ve seen it in action, even if you’re not aware of it. Most Americans aren’t. Yet it’s a concept that inflects nearly every part of U.S. politics, touching the lives of all Americans as well as plenty of others around the world.

It is the battle plan for an American theocracy that has been in the works since the 1970s. At least, that’s when the movement’s founders claim God spoke to them individually and directly about the seven “mind molders” of culture and how to claim them for Jesus Christ.

The Seven Mountain Mandate has since become what journalist Elle Hardy calls “the theocratic wave of populism” and “a new and determined Moral Majority for the 21st century” — one that seeks a completely transformed culture, not just in laws and politics, but in every realm of life: the titular Seven Mountains of Religion, Family, Education, Entertainment, Media, Government, and Business.

The theory goes like this: If enough people inject enough Christianity into all of these seven aspects of life, Christians can transform the culture in ways that will both reshape society and prepare it for the End Times. It’s an idea that sanctifies the pursuit of power and justifies just about anything done in the name of Jesus.

The concept first came into being in 1975, when God breathed the idea of the Seven Mountains into the minds of Bill Bright (founder of Campus Crusade for Christ) and Loren Cunningham (founder of Youth With A Mission), respectively. They embraced the model but weren’t able to make particularly effective use of it until the early 2000s, when business consultant Lance Wallnau joined the team and began getting the message out more broadly, hosting seminars on how to bring godliness into the secular sphere. In 2013, he partnered with Bethel’s Pastor Bill Johnson to author Invading Babylon: The Seven Mountain Mandate.

That word choice — invading — is important. The language and imagery of battle infuses much of the Seven Mountain Mandate’s ideology, a nod to the concept of spiritual warfare, the idea that everyday life is the backdrop for a cosmic-scale war between good and evil. Evangelical author Priscilla Shirer puts it like this:

Everything that occurs in the visible, physical world is directly connected to the wrestling match being waged in the invisible, spiritual world. The effects of the war going on in the unseen world reveal themselves in our strained and damaged relationships, emotional instability, mental fatigue, physical exhaustion, and many other areas of life. Many of us feel pinned down by anger, unforgiveness, pride, comparisons, insecurity, discord, fear… and the list goes on. But the overarching, primary nemesis behind all these outcomes is the Devil himself.

With its martial imagery and stark us-versus-them battle lines — to say nothing of the idea that our all-too-human frailties can be blamed on unseen devils instead of our own clay feet — maybe it’s no accident that the concept began to gain prominence amid the hyper-nationalistic, quasi-religious wartime conservatism ascendant in the aftermath of 9/1l.

When the stakes are this high, it’s easy to justify theocracy, even fascism. After all, you wouldn’t want to let the bad guys win, would you?

The emphasis on the unseen grows out of the movement’s Pentecostal roots. Pentecostal theology focuses on the centrality of the Holy Spirit acting in the lives of modern Christians, just as the Bible reports it acted on Christ’s apostles, empowering them to preach to everyone around them. Pentecostals believe that similar miracles are possible in the modern church, still guided and supported by the Holy Spirit.

Ironically, given the Seven Mountain Mandate’s focus on things of the world, Pentecostals put a lot of focus onto the world unseen.

But that doesn’t mean they confine their impact to the hereafter: quite the contrary. For Pentecostals — and for believers in the Seven Mountain Mandate — the invisible powers and principalities are deeply relevant, not just in the hereafter, but here and now.

In an archival video on his YouTube channel, Wallnau explains it this way:

What we need to be doing now, in this complicated world that we’re having such a limited impact, is we should be going into all the systems instead of all the nations… The Christians in the West are not shaping culture because they don’t understand the game. The game is: not souls only, but nations. If you get a nation you can win souls. It’s not about just focusing on eternity, it’s about focusing on what’s happening now.

But this is an old video. In 2020, Christians in the West are shaping culture, with a lot of prominent Seven Mountain believers gaining prominence in Trump’s America.

Remember the “Satanic pregnancies” lady? That phrase turned out to be Pentecostal jargon, and the person who spoke it was Paula White, “spiritual adviser” to Donald Trump. She may be a wacky lady with strange ideas who’s tried to fleece her followers (more than once) through spiritual manipulation, but there’s no denying her position of power.

In fact, Trump has become a bit of a poster boy for the Seven Mountain Mandate despite being almost certainly clueless about what it means, at least from a spiritual perspective. At the recent 2020 Conservative Political Action Conference (CPAC), Turning Point USA’s Charlie Kirk praised Trump as “a president that understands the seven mountains of cultural influence.”

Trump may not be on board with the theology, but he understands power, influence, and the art of the grift.

And for every person who cites the Seven Mountain Mandate as a specific influence, there are many more who’ve never heard of it, but who nonetheless act on it by another name — the “Culture Wars” or the “battle for the soul of our nation” or “Making America Great Again.” 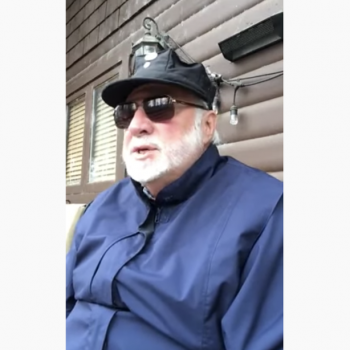