You Should Feel Bad for the Priest Who Quit After Getting Caught Using Grindr July 21, 2021 Hemant Mehta

On Tuesday, Monsignor Jeffrey Burrill, the general secretary of the United States Conference of Catholic Bishops (USCCB) resigned from the position he’s been holding since last November. (The USCCB is the conservative wing of the Church that recently made headlines for suggesting pro-choice Catholic politicians like Joe Biden should be denied communion, though they backed off from that position after public outcry.)

Burrill (below) wasn’t accused of any crimes. There were no allegations of child sex abuse or anything like it. He wasn’t involved in any financial improprieties.

So why did he resign?

Because an outside group tracking his phone found that he was frequenting gay bars and using the hookup app Grindr to presumably meet other men. 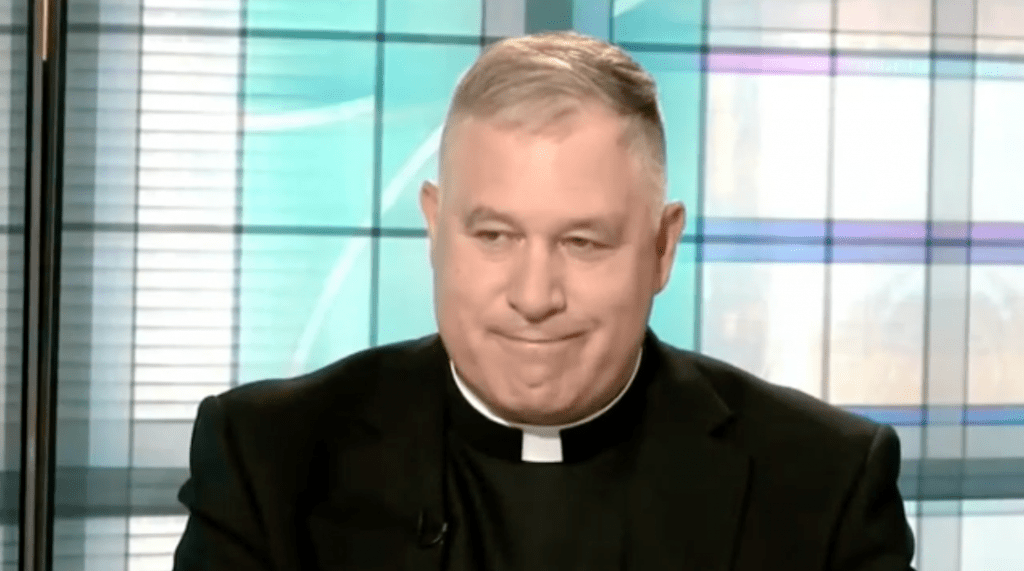 Let’s back up for a second. The Catholic News Agency says that, in 2018, they were approached by an individual with a proposal:

This party claimed to have access to technology capable of identifying clergy and others who download popular “hook-up” apps, such as Grindr and Tinder, and to pinpoint their locations using the internet addresses of their computers or mobile devices.

The person’s hope was that the Church would use the technology to root out priests who were violating their vows by having sex or inviting scandal into the Church. The CNA refused the offer. It’s not clear how the individual was tapping the phones but it was undoubtedly plausible, if highly unethical. Of all the ways to police priests, catching them in the act of a consensual hookup seems fairly low on the list of problems I have with Catholic Church leaders. Yes, they would be violating their vows, but the priests aren’t the problem. The anti-gay, anti-sex vows are the problem.

Anyway, while the CNA said no to the offer, a Catholic website called The Pillar appears to have accepted it, and that outlet broke the news about Burrill.

According to commercially available records of app signal data obtained by The Pillar, a mobile device correlated to Burrill emitted app data signals from the location-based hookup app Grindr on a near-daily basis during parts of 2018, 2019, and 2020 — at both his USCCB office and his USCCB-owned residence, as well as during USCCB meetings and events in other cities.

Data app signals suggest he was at the same time engaged in serial and illicit sexual activity.

On June 20, 2018, the day the McCarrick revelations became public, the mobile device correlated to Burrill emitted hookup app signals at the USCCB staff residence, and from a street in a residential Washington neighborhood. He traveled to Las Vegas shortly thereafter, data records show.

On June 22, the mobile device correlated to Burrill emitted signals from Entourage, which bills itself as Las Vegas’ “gay bathhouse.”

The data obtained and analyzed by The Pillar conveys mobile app data signals during two 26-week periods, the first in 2018 and the second in 2019 and 2020. The data was obtained from a data vendor and authenticated by an independent data consulting firm contracted by The Pillar.

The Pillar contacted the USCCB about the data last week, giving them time to respond. Before the website received any answers, though, the USCCB announced Burrill’s resignation.

Everything about this “scandal” just rubs me the wrong way. It should bother you, too. Whatever you think about the USCCB, the Catholic Church, or priestly vows, what did Burrill do that was so problematic? Well, he’s gay and wanted to act on that, but because he’s a Catholic priest, he was forced to do it in secret, and… that’s it. That’s all. That’s the whole story.

The Pillar went out of its way to say there’s no evidence Burrill met up with minors — suggesting falsely that there’s a strong link between people on Grindr and child sex trafficking. The site unfairly suggested that Burrill, whose job involved coordinating the U.S. Church’s response to child sex abuse cases, was incapable of doing it because of his actions.

In fact, a large portion of the article is spent talking about child sex trafficking, priests who have molested children, and the role of hookup apps to facilitate all that — and none of it is relevant to the case of Burrill! It’s all a red herring. For all we know, Burrill just wanted to have sex with other consenting adult men. Who cares? It’s a violation of a rule that shouldn’t exist. But The Pillar even quotes someone who says that a priest failing to live up to the Church’s sexual rules is “only a step away from sexual predation.” What?! No! Not even close!

Sure, the hypocrisy is worth pointing out. Burrill has probably spent years struggling with Church-enforced sexual repression. The Catholic Church is also within its right to push him out of his position. I don’t have a ton of sympathy for gay priests who choose to join a corrupt, bigoted institution, then whine about being unable to have sex or get married or have children. But I also refuse to treat a gay priest as some kind of heretic because he broke his vows in order to act on his perfectly natural (and legal and consensual) desires.

There’s no reason to think he was putting anyone in danger or mishandling his job or committing financial crimes… like the colleagues of Pope Francis.

The whistleblower just wanted this guy out because he dared to act on his homosexuality. The Pillar was happy to play along. Their ethical lapses are far more concerning than anything Burrill did.

I am a sinner. So are you. So is Monsignor Jeffrey Burrill. Not one of us has a personal life that would withstand the sort of scrutiny The Pillar has applied to Burrill. Every single one of us has had a shameful moment we regret, and I suspect most of us must be caught up in cycles of sinfulness that we repeat less because we want to than because we are sinners and cannot help being sinners.

… unless there is some reason to think he has harmed someone else, I feel sure his sins are none of my business, as much as my sins are none of yours. As a Catholic, I am bound to believe all of that.

He’s right on the principles. If strangers could have access to everything you were doing on your phone, or in your private life, would you feel comfortable having those details exposed to the world? Priests deserve privacy, too — even if that involves hypocrisy concerning the Church’s rulebook, and especially when no one is hurt in the process.

Millies also notes that buried in The Pillar‘s story is another ethical lapse on their part: They outed Burrill without his consent. That aspect of the story is getting very little coverage.

The USCCB’s response to all this has been a textbook example of what not to say:

What was shared with us did not include allegations of misconduct with minors. However, in order to avoid becoming a distraction to the operations and ongoing work of the Conference, Monsignor Burrill has resigned, effective immediately.

The Conference takes all allegations of misconduct seriously and will pursue all appropriate steps to address them.

So… He didn’t molest kids, but he still did something really really bad, so we’re not going to defend him. Such cowardice and homophobia. (“Misconduct”? Are you kidding me?!)

I freely admit he broke his own vows. I also think it’s fair to criticize a gay priest for promoting a Catholic Church that’s done so much harm to LGBTQ people worldwide, just as it’s fair to call out Republican officials who claim to support LGBTQ rights while propping up a party that works to undermine those rights.

But on the spectrum of bad behavior by priests, this is a nothingburger.

The people using private (if legal) data to out a priest for hooking up with other adult men, and the people agreeing that his resignation is warranted, all to defend outdated and bigoted Catholic rules that shouldn’t exist in the first place are the real problems here. 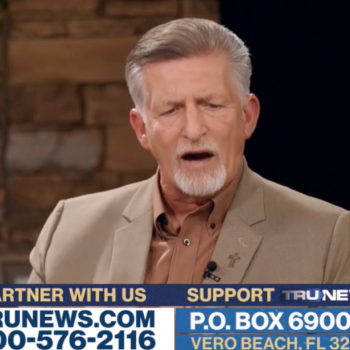 July 21, 2021 Rick Wiles: We Must Destroy "Sissified Lefties" & Biden's "Communist Revolution"
Browse Our Archives
What Are Your Thoughts?leave a comment