“Prophet” Robert Sanchez: God Told Me to Beat Up a Church Member, So I Did! June 9, 2021 Hemant Mehta

“Prophet” Robert Sanchez: God Told Me to Beat Up a Church Member, So I Did!

Sid Roth, the host of a show called It’s Supernatural (and guy obsessed with how God is fixing his clogged toilet) is back to taping episodes of his show.

He recently brought on self-described “prophet” Robert Sanchez who, at one point, explained how he once spoke at a conference, and when a member of the audience said goodbye to him, Sanchez just got the urge to start beating him mercilessly. He “ran at him,” he says, like a bull chasing a red flag. He hit the man repeatedly.

In a normal world, that would be considered assault. Sanchez would be arrested. He certainly wouldn’t be bragging about it.

So how did he justify the violence? Simple. He says God told him to beat the man up. (You can hear the story around the 16:24 mark.)

I was in Zion, Illinois, and I was part of a prophetic conference. It’s a Sunday morning. Service ends. Everybody is on their way out. I was lingering around saying hi to a few people. In this moment, a gentleman from about 20 to 30 yards away, he waves his hand at me and he goes, “Bye, prophet Rob,” and I go, “Bye,” and he goes, “We’ll see you later,” and suddenly I was like a bull seeing red. I literally looked at him and began to shout these words, “Never again. You hear me? Never again,” and in that moment, I did the unthinkable. I ran at him like a bull charging a flag, and I pulled out my fist.

[ROTH: Did you think what you were doing or you just did?]

I just did. It was a response. It was a supernatural moment. It was spontaneous. I have never been in a fight, never been in an altercation in my life. I have to get saved and become radically obedient to do the unthinkable. I ran at this man, and with my hand pulled back, I hit him in the chest. You think once is enough? Two, three, four times at least. The power of God hits this man. He’s kind of doing one of these flailings, and he falls forward. You think I’m done. Something comes over me, and I dive onto this man.

[ROTH: You’ve been watching too many Westerns.]

I don’t know what happened. I dive on this man, and I begin to squeeze him with the Father’s love, and immediately I begin to prophesy. I began to speak a word right into his heart, face-to-face. I’m wrestling with him, and I begin to say these words, “Never again, never again, never again, will you pick up things that are unclean. Never again will you have dreams of the pain that you suffered as a child. Never again will you put something into your arm that is destroying your body. For the Spirit of the Lord says, ‘I’ve come to set you free.'”

I come out of this prophetic atmosphere. I stand up. There’s people watching, and the first thought I had is, “Oh, my God, I’m going to jail,” and the Holy Spirit said, “No,” and then He said, I said, “Lord, I need a word. Why would you have me do such a thing?” And he said these words, “Rob, radically this man’s life was taken away from him.” He said, “Radically today, I gave it back to him.”

And that very moment, I asked for the elders and the leaders that were there, “Can I please go talk to your pastor?” So, we go downstairs, and I look at the pastor, and I say “Can I talk to you?” He goes, “Are you okay?” My shirt was a mess. My tie was all wrinkled up. I’m hot, and my knuckles are bleeding, and I literally say, “Well, I would like to say,” and he says, “Just say it,” and I said, “Well, I kind of got in a fight with one of your congregational members.”

And I said, “Well, praise the Lord, why good?” And he responds. He says, “Rob, God used you to give that man what he needed.”

He said, “But I couldn’t give him that.” He said, “God has called me to be the shepherd, the pastor, and I’ve got to love him, but God loves him so much He gave him what he needed,” and he began to tell me the rest of the story. That man that I’m speaking about today still attends that church. He’s become an elder in that ministry, and he wears what took place that day on that altar as a badge of honor because he knows that God mightily set him free.

Sure that happened. A pastor punched out a congregation member and no one got it on video. No one freaked out about what was happening. Everyone was just cool with it.

But his story raises so many other questions. What if God told him to be even more violent? What if God told Sanchez to shoot the man? At what point does God stop working as an excuse for violent behavior?

No one seems to care about that issue. Not Sanchez. Not Roth. And certainly not the studio audience that’s not actually there but is being spliced into the video as if we can’t tell what’s going on. Truly disturbing stuff all around. 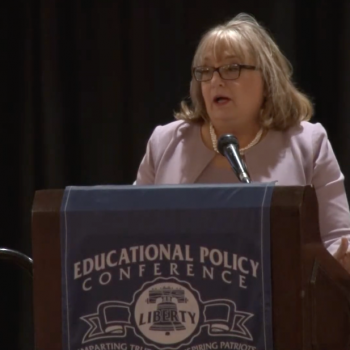