For some reason, and not for the first time, a Catholic leader got into a plane in order to sprinkle holy water over a city because… does it even matter?

The flight was a sort of metaphor, the archbishop said: The plane was used in war and right now we’re in a war with the coronavirus. He said he particularly asked God to offer grace to the health care workers, the first responders and the city leaders who are on the front lines of the battle.

Aymond recently recovered from his own fight with COVID-19. The archbishop said he experienced only a high fever and was spared the coughing and severe lung congestion that others have suffered when infected by the virus.

We may not have a vaccine for the virus yet, but we can be certain that prayers and water sprinkled from above (by an apparently very sick man) aren’t going to make a difference. But at least the archbishop found a way to keep busy, I guess.

Sure, the Catholic Church could donate more money toward medical care, but why bother with that when you can rent a plane and only pretend to help? 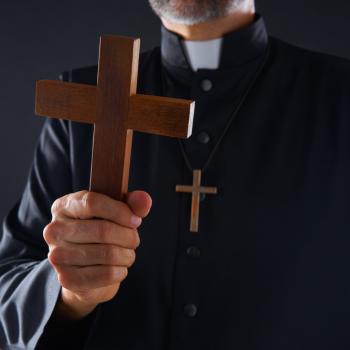 April 12, 2020
NY Times Is Wrong When It Says Priests Have "Joined the Fight" Against COVID-19
Next Post

April 12, 2020 You Can Already Guess How Ralph Reed Makes the "Christian Case for Trump"
Browse Our Archives
What Are Your Thoughts?leave a comment