Christian Activist: I Prayed and God “Made Gold Dust Manifest on my Hands” June 12, 2019 Hemant Mehta

Christian Activist: I Prayed and God “Made Gold Dust Manifest on my Hands”

Dave Hayes, a Christian activist known as the “Praying Medic,” declared on his show this week that, this one time, he prayed for God to put gold dust on his hands and it worked.

Hayes explained he was in North Carolina to tape a TV show (more on that in a moment) and he was hanging out in the lobby of a hotel with his friends. Then he told this story:

… My friend Michael King prayed over my hands and he made gold dust manifest on my hands. Now, I say “he made.” Well, he just prayed, and God, the Holy Spirit, manifested gold dust on my hands…

Sure, buddy. Anyway, he was telling his friend this story when God “spoke” to him and said “show her.”

… I was like, “Oh, you mean pray over her hands to hand gold dust?”… And she put out her hands, and I put my hands underneath hers, and I prayed and asked God to bring His glory upon her… and I prayed for about 3 or 4 minutes, and you could see flakes of gold dust appearing on her hands. Her mouth hung open, and she was like, “What?! What the what?! I can’t… what?!” She was flipping out!

Sure. That’s totally what happened. He didn’t take any pictures or video, and there’s no chance it was just light bouncing around, therefore it happened, you guys, it happened. God won’t cure babies with brain cancer, but want some glitter on your hands? Done!

And then, Hayes says, his friend “got red-pilled about the glory of God.”

Which is totally not how anyone uses that phrase.

That TV show Hayes was appearing on, by the way, was It’s Supernatural, hosted by Sid Roth. The show is so damn weird that it’s featured a man saying Jesus taught him to play the saxophone while he was dead and another man saying God literally grew his missing hand back. If people are gullible enough to take that show seriously, then no wonder a story like this would be accepted by the audience, too. 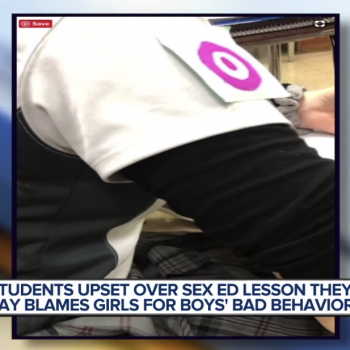 June 12, 2019 Pastor Who Works for TN Police Dept. Says Gays Should Be Executed By Police
Browse Our Archives
What Are Your Thoughts?leave a comment