Evangelist Robin Bullock: God Wants Donald Trump to Listen to Prophets Like Me

Always one to have an answer for his failed “prophecies,” Robin Bullock now says he received a message from God warning Donald Trump to ignore people who tell him to dismiss prophets.

Bullock defended his statement by reading that message from God (along with a Bible passage ripped from its intended context):

Well, that is convenient. Self-proclaimed "prophet" Robin Bullock claims to have received a word from God for Donald Trump, warning Trump not to listen to his political advisers who are advising him not to listen to the prophets. pic.twitter.com/9bzBksChOp

… I have a mantel from Heaven to say these things. This is an anointing to speak into the political realm. I am a prophet to the nations, and a prophet to this nation… And the Lord says this. I heard these things. I heard a conversation say, “Don’t listen to the prophets this time. Wait”… I heard their conversation, but the Lord says they have their own agenda in their minds, and it don’t include President Trump. It don’t include him at all! They plan on running… his time out.

If anyone knows how to translate that, the floor is yours. But the gist is that Trump’s advisors are working against him somehow. But God is on Trump’s side. (Strange, considering Trump’s time ran out earlier this year.)

Bullock is awfully confident for someone whose prophecies of Trump’s glorious return have failed… and failed… and failed again. But that’s how you maintain an audience, I guess. Fake it till you make it. He’s also confident that he heard God clearly, which must have been difficult considering how the sound waves had to travel through a cube made of gelatin.

It’s bad enough when modern-day Christians take ancient Bible passages out of context to suit their own unrelated political agendas. Listening to Bullock talk, though, you’d think it’s #45 himself who’s the real object of worship here. And host Steve Shultz, as always, never asked any meaningful questions about the misplaced loyalties. 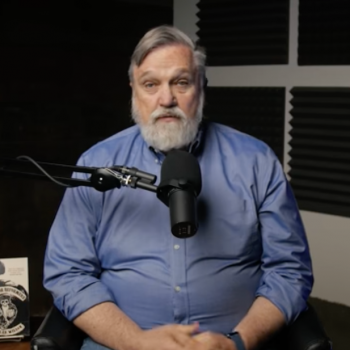 September 29, 2021 A Closer Look at the "Patriarchal Cult" Run by Douglas Wilson
Browse Our Archives
What Are Your Thoughts?leave a comment