In the latest edition of Play Stupid Games, Win Stupid Prizes, a campus preacher who told women to exchange college for “faith, a Bible, and a good cookbook” and carried a sign that said “Women belong in the kitchen” got punched out by at least one student at the University of Alabama at Birmingham (UAB) on Tuesday.

The preacher is Daniel Rusk of WALKabout Jesus ministries — and yes, there’s video.

The student in question — who didn’t respond to my request for comment — says she was provoked by Rusk before the clips seen in those tweets. So she didn’t strike him out of nowhere; she says she did it in retaliation or self-defense. Campus police apparently took Rusk away, at least temporarily, according to his preacher wife Mary Rusk. But it’s not clear if the student or preacher will face any charges.

Police say they are investigating the incident but have not confirmed if any arrests have been made, or if anyone was injured.

“There was a concerning, very unfortunate altercation on campus yesterday between demonstrators and what appeared to be a student,” a university spokesman said.

“We cannot comment further at this time, as this is an ongoing investigation.”

Mary Rusk’s profile picture on Facebook at the moment is her holding up a sign that says “Stop sexual assault!” with the words “Short shorts” crossed out. In other words, she’s telling women to stop dressing provocatively if they want to avoid getting assaulted; it’s victim-blaming that comes with no criticism whatsoever for the hypothetical male attackers.

This is what these people do, though. They walk around trying to goad college students into fighting with them, take pictures, then post them online as if it’s evidence of Christian persecution and how they’ll stop at nothing to bring Jesus to these godless students.

This time, however, they went too far and paid the price for it. While the police investigation is ongoing, people online seem incredibly sympathetic with the student as soon as they find out what Rusk was shouting at her in the name of Jesus.

If this is the best way he can think of to spread Christianity, it’s a sign that he doesn’t have a good product to sell. 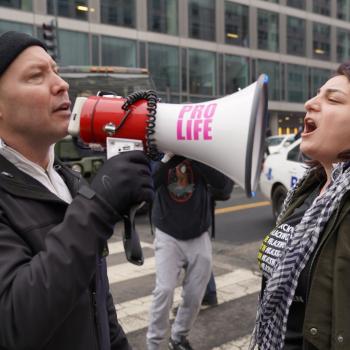 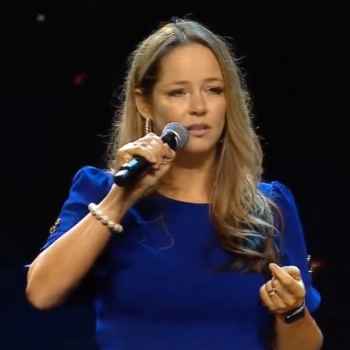