CA Sec. of State Candidate Claims God Told Her to Run and Her Son’s a “Prophet” September 19, 2021 Hemant Mehta

CA Sec. of State Candidate Claims God Told Her to Run and Her Son’s a “Prophet”

Here’s what you need to know about Rachel Hamm, a candidate to become California’s next Secretary of State: Her qualifications include being the director of children’s ministries at a church. She touts an endorsement from MAGA cultist and pillow salesman Mike Lindell. She has a YouTube channel with under 40,000 subscribers which she believes is such an achievement that she describes it this way on her website:

In 2020 Rachel launched The Rachel Hamm Show which highlights political, cultural, and spiritual issues facing us today. Rachel has an audience of 35,000+, with people tuning in from all over the world. As a result, Rachel has been invited to speak to audiences all over the nation.

She does not have an “audience of 35,000+.” In fact, only one video has had more views than that. (The number of subscribers isn’t synonymous with the number of people who actually watch you.)

Oh. And her son is a prophet who sees angels in her house.

All of this, again, is why she thinks she should help run California’s government.

During an appearance at the “Opening the Heavens Conference,” hosted by Nebraska preacher and false prophet Hank Kunneman of One Voice Ministries along with his wife Brenda, Hamm talked about how God wanted her to run for office and how her son sees dead people. Or something like that. (Watch the videos from the bottom up.)

Rachel Hamm claims that her youngest son is a "seer" and a "prophet" who saw God fill her house with angels to protect her as she carries out her right-wing activism. https://t.co/ByfYrvRbAs pic.twitter.com/RDy1F08ZXd

I was praying about, um, California, you know, just telling the Lord certain things and the problems, blah blah blah, and Lord, I mean, what are we gonna do about this? What are we gonna go about that? And He said, “Rachel, you don’t understand. California is hopeless.”

I said, “Sir? Then why am I here? And why am I running for Secretary of State?”

And He said, “Well, this is the thing. Truly, it is hopeless… apart from God.” Like, I mean, it’s such a mess. But this is the thing: We’re not apart from God. So… So there’s hope. And I have personally experienced miracles! So I know what God can do, and He can do whatever He wants to do, and I believe He intends to do amazing things in California! Watch! Keep watching California!

God told me, “You think you’re running for Secretary of State, Rachel, you are not.”

Again, “Sir, are You sure? Because I have a website that says that I am.”

And He said, “I am sending you out to expose lies, to speak truth, and to establish My kingdom every single place that you stepped your foot.”

… Well, my youngest son is a seer. That means that he sees in the spirit. So he sees angels. He sees demons. He sees light and dark, and, you know, all kinds of spiritual stuff. He’s also a prophet.

So he’s home because he’s been exposed to COVID and isn’t allowed to go to school. He comes and knocks on my office door, and I opened the door, and he said, “Um, just wanted to let you know the house just filled up with angels” right after I asked for them.

And, you know, so many of us ask for angels to protect us, and then we have to trust by faith that they’re there. And that’s… good. That’s fine. But, like, praise God to have a seer to come in and say “What you just asked for…” — but he didn’t know I’d asked, right?! Like he’s out there, I’m in here, “Lord, give me angels” — So he said there’s angels throughout the house, and he said, and I asked him why they’re here.

What any of that has to do with making sure elections are run properly and fairly, I have no idea. Her campaign website is just a series of right-wing conspiracy theories about supposed election fraud that have no basis in reality. She’s just another Christian zealot with delusions of grandeur — atop her other delusions — who thinks being an elected official is the best way to spread the gospel… or at least spread the right-wing conspiracies that now make up her religious faith.

In any case, given how poorly Republicans have fared in statewide elections in California, let’s hope she’s eventually one of the people on the ballot since she could help drag down the entire GOP ticket. In 2018, the GOP nominee received a mere 36% of the vote.

Her actual goals include instituting voter ID laws, eliminating mail-in voting, getting rid of early voting, and letting right-wing crazies monitor polling places. As we just saw this week, California voters have no desire to become as awful as Texas. So let’s hope she keeps talking. She’s only helping her eventual opponents. 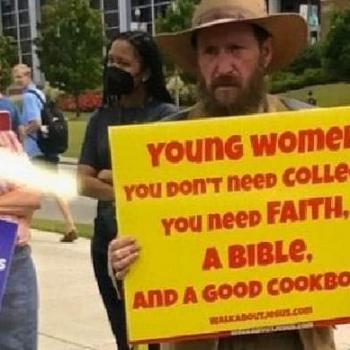