Christian Hate-Preacher Does Damage Control Before CNN Story on His COVID Lies May 27, 2021 Hemant Mehta

Back in December, Christian Hate-Preacher Greg Locke warned his followers that CNN was about to air a segment about his Global Vision Bible Church in Tennessee. He had sat down for an interview with reporter Elle Reeve, so this wasn’t a surprise, but he claimed in a tweet (before anything aired) that the segment “WILL be a hit piece without question.”

It wasn’t a hit piece, of course. The segment accurately explained how Locke refused to wear a face mask, held in-person (but outdoor) church services where no social distancing precautions were followed, and rejected COVID vaccines.

But the part everyone remembers is the interview. Locke vocally denied that there was a pandemic, but when Reeve asked him to define the word “pandemic,” he couldn’t do it.

In Wilson County, Tennessee, conservative pastor Greg Locke resists wearing a mask and has no plans to take a Covid-19 vaccine.

"There's no pandemic," he tells @elspethreeve.

REEVE: I don’t understand what you mean when you say “pandemic’s not real.”

LOCKE: … The pandemic is not real.

REEVE: But what do you think a pandemic is?

REEVE: But what do you think a pandemic is?

LOCKE: It is no pandemic.

PUBLICIST (offscreen): I think we’ve stuck on the pandemic question too many times.

REEVE: Well, why can’t you answer it?

LOCKE: It’s ridiculous… I did. There’s no pandemic! COVID-19 is not a pandemic.

LOCKE: Not what we’re experiencing. I’m 44 years old. We’ve not had one in my lifetime, so I don’t know. And this is not it.

He doesn’t know… but he insists he’s right. It’s a perfect snapshot of his brain cell.

As anyone could’ve told you, Locke is an ignorant man who projects unearned confidence from the pulpit, and this interview encapsulated it in mere seconds. He can deliver a monologue, but he fails at dialogue, especially when it’s with someone critically examining his words.

It now seems that CNN is doing another segment on Locke, scheduled to air this Friday evening on Anderson Cooper‘s show. It comes days after Locke lied to his congregation by calling vaccines nothing more than “sugar water.” And, if the rumors I’m hearing are correct, the segment will also focus on at least one member of his congregation who died of COVID as a direct result of taking Locke seriously.

In a Facebook post on Monday, he explained that he refused to speak with CNN on camera this time because God warned him “This is a set up.”

… This was to be a follow up visit to clarify my strong stand against “the shot”. The interview was actually scheduled for today at my office. So during service yesterday I gave them a load of footage they could use. I was plain, forceful, Biblical and unapologetic. Newsweek and others already grabbed it up and spun it in their normal Leftist direction. However, then this happened.

The office building was set up and ready to go. My schedule was clear and I was arriving early. The camera crew was on their way. I pulled into the parking lot and immediately I felt nauseous. I do this mess with the news every single week so it’s really not a big deal. But as clearly as I know my name the Holy Spirit said “This is a set up. Cancel the interview and leave now”. It was abundantly clear. As soon as I was pulling out, they were pulling up. I knew it was the correct decision because even as I wrote this they are being extremely hostile with our staff, demanding that I sit down with them and setting up cameras in our tent after they’ve been told to leave. I know I heard from the Lord. It’s already been confirmed by at least 4 people since I drove away. To be clear, I have talked to them over and over and it was not a conflict of schedule. No! God said cancel it. I’m convinced we avoided a deeper debacle. They’ve got plenty of platform footage they can use.

It wasn’t a “set up” months ago when Reeve asked Locke to simply clarify his own statements, and there’s no reason to think anything would be different now. Why bother inventing controversy when Locke’s insanity already shines through on stage?

But he wasn’t done yet! Besides changing his profile picture to something that looks family-oriented, he also posted a video saying much of the same stuff in that post, adding that “CNN is about to find themselves in a courtroom with Pastor Greg Locke and Global Vision Bible Church.” (Over what? Good luck figuring that out.)

He seemed to be angry that CNN interviewed other members of his church as well as some of his critics… which is how real journalism works. Locke also whined about how reporters are trying to make his church look like “a bunch of cultish snake-handling crazy people.” Though if Locke is refusing to do an interview, and demanding they use footage from his sermons, and saying it’s all going to make him and his church look insane… then that’s quite a self-own.

Locke isn’t just a threat to public health. He’s a coward who can’t defend his own bullshit. He wants attention but can’t handle questions. He wants to preach fire and brimstone but refuses to take responsibility for the consequences of his sermons.

This is where Christianity led him. And unfortunately for many members of his cult, Locke’s not going to do a damn thing to help them after they suffer because they foolishly took his advice to heart. 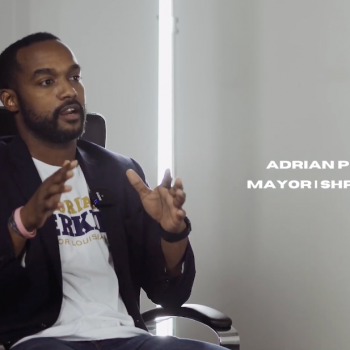 May 27, 2021
Mayor of Shreveport, LA Declares Two Days of Prayer to Stop Violence
Next Post