Richard Dawkins: It’s “Wise and Sensible” to Abort Fetuses with Down Syndrome May 13, 2021 Hemant Mehta

Richard Dawkins: It’s “Wise and Sensible” to Abort Fetuses with Down Syndrome

In 2014, in response to a Twitter conversation about Ireland’s anti-abortion laws, a woman told Richard Dawkins that she wasn’t sure what she would do if she were pregnant and learned her fetus had Down syndrome. “Real ethical dilemma,” she wrote.

She’s not alone in that concern. A lot of soon-to-be parents have had tough conversations about what they might do if they discovered, deep into a pregnancy, that their child would have some kind of developmental disorder. Those are not easy questions to answer. The situations are different for each couple.

Dawkins didn’t find it that complicated. “Abort it and try again,” he said. 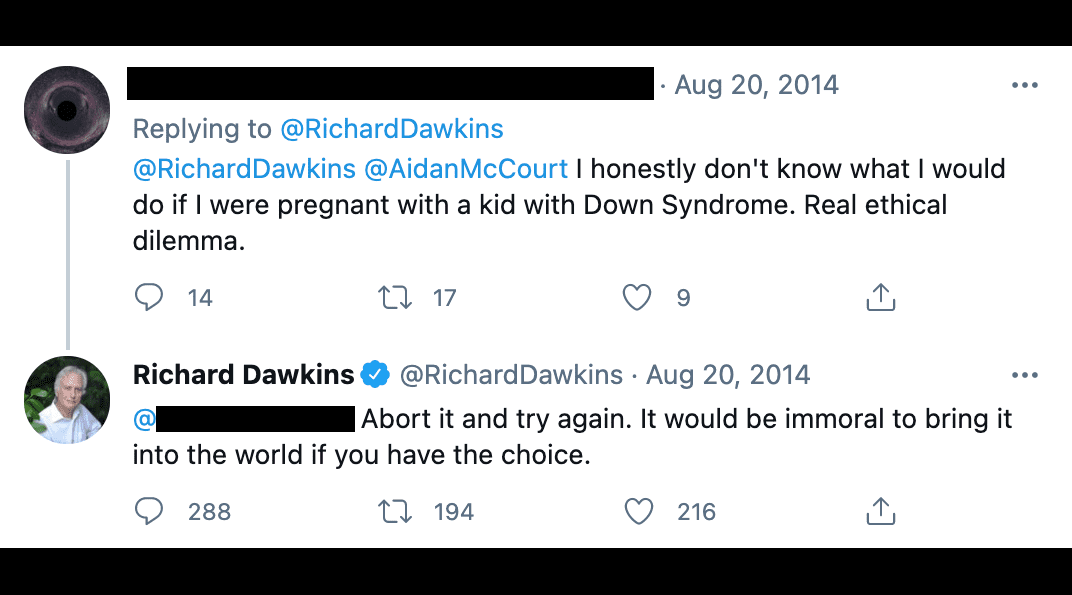 In addition to the casual bluntness about a decision that tears some people apart, it was a slap in the face to every parent who’s had a child with Down syndrome and couldn’t imagine life otherwise. While it was only a tweet, with character limits, it also ignored the fact that plenty of “healthy” babies have other kinds of struggles as they grow. Not all parents believe a child’s genetic abnormality is some kind of giant imposition to the world.

But the reason that comment rubbed so many people the wrong way was because it wasn’t just Dawkins’ personal position. He wasn’t saying he (or his partner) would want an abortion in that situation. He was saying it was “immoral” for you to go through with the pregnancy.

He was roundly criticized at the time for that heartless tweet — he later apologized for it in a (still problematic) longer essay — and that comment was brought up again last month when he rolled out another cruel tweet against trans people as evidence of how Dawkins regularly puts his foot in his mouth.

I bring that up because Dawkins just released a new book, Books do Furnish a Life, which means he’s doing promotional interviews. One of those stops was with Brendan O’Connor of Ireland’s RTÉ Radio 1.

The 20-minute segment was one of the better interviews of Dawkins I’ve ever heard because O’Connor’s questions were pointed and revealing in unexpected ways. For example, he asked Dawkins what he thought about people finding comfort in religion during the pandemic — Dawkins said he “hadn’t noticed that” (?!?) before adding he didn’t begrudge anyone finding comfort in faith… within limits. He also asked about the more recent controversy over Dawkins’ transgender tweet, which Dawkins defended as he echoed the right-wing talking point about how the real danger is the “new religion” of being “woke,” whatever the hell that’s supposed to mean.

And then O’Connor asked about that Down syndrome tweet, prefacing it by saying he had a personal interest in the matter:

"How do you think it's immoral to bring a child with Down Syndrome into the world?"@RadioBrendanRTE spoke with Professor Richard Dawkins who believes children with Down Syndrome can potentially increase the amount of suffering in the world.
Listen back: https://t.co/TwLQ9VhSdB pic.twitter.com/B2himKI7kU

(The transcript below is from the full interview that aired. The video above had to be edited to fit inside Twitter’s limits, but it didn’t miss anything substantive.)

O’CONNOR: … You got involved in a Twitter interaction with a woman who said she would be faced with a real ethical dilemma if she became pregnant with a baby with Down syndrome. You tweeted, “Abort it and try again. It would be immoral to bring it into the world if you have the choice.” Now… you’re speaking to somebody who did bring someone like that into the world, okay, but let’s put that aside. I’m interested in: How do you think it is immoral to bring someone with Down syndrome into the world?

DAWKINS: I think that once you have a child with Down syndrome, you love it, you cherish it, everybody does, that’s well-known, I wouldn’t deny that for one single moment. But before it’s born, the vast number of people who take an amniocentesis and is diagnosed with Down syndrome, as a matter of fact, do abort it. This is just a fact…

O’CONNOR: [I] accept that fact and I wouldn’t judge anyone’s choice about that, but why is it immoral now to abort it?

DAWKINS: Well, that was probably putting it a bit too strongly. But given that the amount of suffering in the world probably does not go down — probably does go up — compared to having another child who doesn’t have Down syndrome, then that’s what I meant. I want to stress over and over again… I was of course not suggesting that people who already have a Down syndrome child don’t love it, shouldn’t love it…

O’CONNOR: I absolutely… I didn’t take that from it at all.

DAWKINS: I’m sure you didn’t, but many people did, and I think that was the reason it got controversial…

O’CONNOR: What I’m interested in is: How do you know that it increases the amount of suffering in the world to bring in a child with Down syndrome into the world?

DAWKINS: I don’t know it for certain. It seems to me to be plausible that… if a child has any kind of disability, then you probably would increase the amount of happiness in the world more by having another child instead.

O’CONNOR: … Do you think. But you have no reason for knowing that.

DAWKINS: I have no direct evidence, no…

O’CONNOR: … Cause you know, you’re such a scientific, logical person that I thought that you could possibly have some logical backup to it… So, do you know anyone with Down syndrome?

DAWKINS: No, not intimately, no.

DAWKINS: Look, I’m sure… I’m sure that that you love your child.

O’CONNOR: Oh, yeah… nothing to do with that. I’m not having an emotional discussion with you here. I’m simply having a logical discussion with you. You said that you would increase the amount of suffering in the world… I was just asking you, in a logical way, how you know that. Listen, what other imperfections would you screen out?

DAWKINS: Well, um, I think definite blindness… when you have the choice, when it’s early in pregnancy, and the fetus is hardly started to develop, almost everybody, as a matter of fact, does abort a child if it has an easily diagnosable disability…

O’CONNOR: Okay, but if we put aside what people do do, you believe that if we can check for deafness or blindness or any other disabilities, that we should. And, look, again, I’m not criticizing you here. You think we should abort those children. Those fetuses.

DAWKINS: Well, it’s a choice that the parent has…

O’CONNOR: Well, do you think it would be immoral for them not to do it?

DAWKINS: … Let’s leave out the “immoral”…

O’CONNOR: … No, but you brought “immoral” into it…

O’CONNOR: Okay — and there’s one other thing I would say on that… purely, again, on the basis of rationality: You know children who are so-called “perfect” can cause terrible suffering in the world as well, but I suppose we have no way of checking, have we?

DAWKINS: No, of course.

Instead of just admitting he made an insensitive thoughtless tweet about a subject in which he lacked any personal understanding, Dawkins chose to defend it — or at least the gist of it — while speaking to someone who has a child with Down syndrome. That last comment from O’Connor was an absolute drop-the-mic moment. Kudos to him for staying composed during that stretch.

This may be the thing that frustrates me most about all these Dawkins interactions on Twitter: They’re not flashes of old-age ignorance, as some have suggested, because he keeps defending the substance of what he says. They really are his gut-reaction beliefs, not just poorly worded comments. They lack empathy. They lack understanding. They lack humanity. And they directly hurt his own cause of showing how a scientific, logical, rational mindset leads us all to a more thoughtful place.

The weird thing is that, when it comes to promoting science and reason, I want Dawkins to succeed. It’s too bad Dawkins keeps getting in his own way.

(Thanks to @LeonieHilliard for the link) 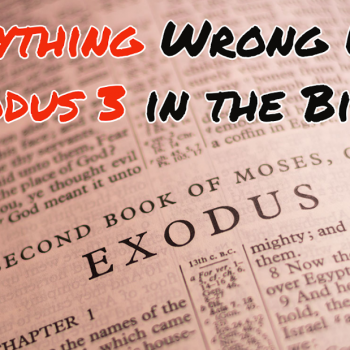 May 13, 2021 Missouri Lawmakers Finally Pass Bill to Regulate Abuse-Heavy Christians Schools
Browse Our Archives
What Are Your Thoughts?leave a comment