On Saturday, for some reason, Richard Dawkins randomly decided to question the humanity of transgender people — under the guise of I’m-just-asking-questions — while comparing their situation to that of Rachel Dolezal:

In case you need help translating that…

In 2015, Dolezal became the subject of controversy when it became public knowledge that her parents were both white. That alone wouldn’t be an issue except that, until that point, she had flat-out lied in public about having a Black parent. She passed herself off, on paper, as Black. She already benefitted from the privilege of being white, but decided it wasn’t enough. When confronted about it, she said she self-identified as Black… and it’s that comment that has made her infamous.

She wasn’t simply vilified for identifying as Black (whatever that means) so much as lying about it to gain some kind of edge in her professional career.

Trans people, on the other hand, aren’t changing genders just for the hell of it. They sure aren’t doing it because it gives them some kind of advantage in society. More to the point: They don’t “choose to identify” as the other gender as if it’s some kind of light switch; they are the other gender. If they undergo surgery or take hormones or request a change on their driver’s license, it’s to correct a mistake, not because they wanted to be another gender on a whim.

So back to Dawkins. He’s comparing a liar, whose lie he passes off as genuine, to trans people, whose truths he dismisses. He’s comparing race to gender, as if they’re the same thing, in a way that allows bigots (including right-wing Christians) to use his words as a weapon against trans people. He also defines trans women as “men [who] choose to identify as women” (and vice versa) when that’s not the case at all.

It’s not merely a question. There’s nothing to “discuss.” It’s transphobic rhetoric — red meat for conservatives — that someone who supposedly values reason should know better than to promote. It’s as if he watched the whole J.K. Rowling debacle and thought I want to get in on that.

It’s not the first time he’s done this:

Is trans woman a woman? Purely semantic. If you define by chromosomes, no. If by self-identification, yes. I call her "she" out of courtesy.

Yes, I know it’s behind a paywall but it’s worth it. Superb article by Trevor Phillips on the oppressive nonsense that can flow from aggressive “wokeism”, e.g. demanding that employees should sign a statement that “trans women are women”.https://t.co/EYp3EPElBg

No doubt there were plenty of conservatives and Libertarians and online trolls — and, yes, atheists — who celebrated the more recent tweet. But the criticism was also (deservedly) harsh:

I've had low expectations for you, for quite some time. As I believe I've made clear. Even so this is disappointing. You've worked hard to be the spokesperson for causes I hold dear; if you can't perceive an accompanying obligation to be more decent than this—step back. Way back.

Why not read absolutely anything that's been written about this and understand it. Absolutely pathetic that you're going down the Gender Critical conspiracy theory hole after reading one stupid book. This is like a teenager level argument about trans people

Cool. Can we stop pretending that Richard is "just asking questions" now?

Or does he need to just start tweeting slurs before we acknowledge that he was always an overly hyped up science communicator writing readable books about other people's work? https://t.co/EHkxGHTUcK

It's long past time he could have been educated out of this crap. https://t.co/BkcrIdD1LI

How would one best go about discussing what seems to be a purposefully obtuse conflation devoid of context?

So it's not even fucking subtle anymore. Cool. Cool cool cool. https://t.co/Cav56kflTP

How is it possible that one of the best longform science writers of all time is also one of the worst shortform writers?

Why is questioning someone’s humanity just a fun little hypothetical for him?

Does he realize he’s parroting arguments made by conservative Christian pastors who have long fought against LGBTQ rights?

Here’s a more pressing question: What is the Center for Inquiry going to do about this?

When Donald Trump banned trans people from the military, CFI’s president denounced it by saying “We stand proudly with the transgender community as an ally in the fight for equal treatment.”

Well, the foundation that Dawkins began is now a division of CFI. Dawkins is on CFI’s Board of Directors. In the past, when one of CFI’s affiliates posted a transphobic comment online, the organization acted quickly to take it down and reiterate its support for the trans community.

At this point, they don’t have the luxury of choosing both.

You know who else agrees with that? The Dawkins Foundation, several years ago.

Shout out to all the people that don’t think science is on the side of transgender people.#TransRightsAreHumanRights #WontBeErased https://t.co/0vFAOKWvDa

April 11, 2021
Tony Perkins: Getting Rid of the Filibuster Would Lead to the "End of America"
Next Post 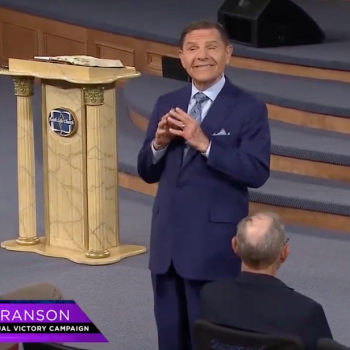