With a Tweet Advocating the Abortion of Down Syndrome Babies, Richard Dawkins Proves He Has Foot-in-Mouth Disease August 21, 2014 Terry Firma

With a Tweet Advocating the Abortion of Down Syndrome Babies, Richard Dawkins Proves He Has Foot-in-Mouth Disease

Yesterday, in a discussion about abortion on Richard Dawkins‘ Twitter feed, this happened: 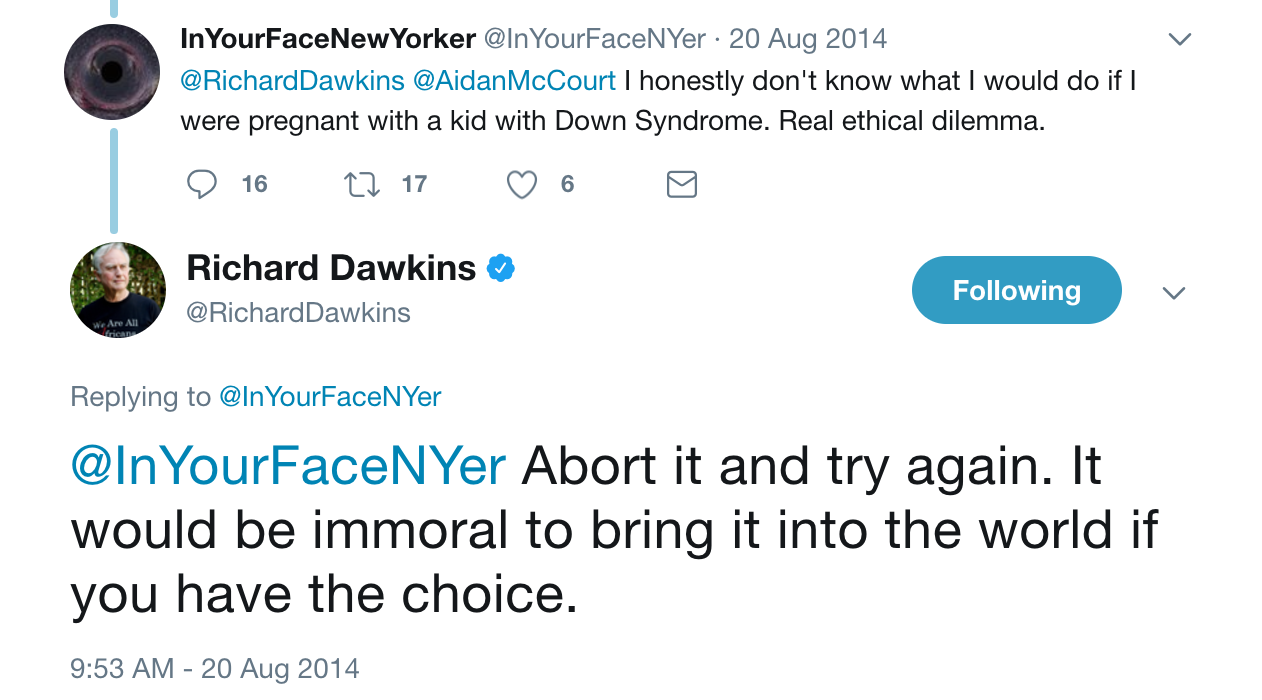 He’s had quite the year, hasn’t he?

I have to confess that this one’s a little personal for me. My next (adopted) daughter, with whom we’ve been officially matched and who will join the family in about six months (pending a mountain of cross-national red tape we still have to work through), comes from a group of young kids with handicaps. Those handicaps run the gamut: from albinism to spina bifida, from strabismus to missing or deformed limbs. And yes, some have Down Syndrome.

I don’t like to think that those children — and their adoptive parents, and everyone else who will grow to love them — would have benefited from them being hoovered up and discarded. (I also don’t think that the decision not to abort is evidence of immorality. What an odd and dreadful thing to say.)

Dawkins has toyed with similar themes in the past. In March of last year, he tweeted:

Well, a fetus has the potential for human life, and a pig doesn’t. But that aside, this kind of statement seems, again, peculiarly devoid of empathy. And the baby-to-pig comparison was mild next to yesterday’s advice to abort unborn children with Down Syndrome.

Look, I get it: Dawkins, 73, is an old-school scientist, one who sees biological creatures as the sum of their cells. That’s not a factually wrong point of view. Were he to expound on his thoughts in an essay or a book, most of us could and would follow him just fine. He’s a longform kind of guy. Nothing bad about that.

But on Twitter, the man constantly makes a mess of things. Whenever he gets half a chance to put his foot in his mouth in 140 characters or fewer, he’s on it.

It’s not a breakdown of his intellect, which is intact. Rather, Dawkins seems to suffer from an extreme form of tone-deafness. It’s almost as if Star Trek‘s Mr. Spock is modeled after him: cool, rational, detached, and faintly amused by the emotional human fools with whom he is forced to interact.

With Dawkins, it’s gone from quirk to pathology. He apparently can’t see his words as they will be read and interpreted by others. That being the case, he’s doing serious (and serial) damage to his reputation, which frankly doesn’t help the image of atheists everywhere.

I’d be a happy man if someone prevailed upon him to shut down or hand over his Twitter account, for the same reason we don’t let a toddler play with sharp objects.

August 21, 2014
A Teacher Printed Out an Old Version of the Pledge for Her Students So, Naturally, Todd Starnes is Furious
Next Post