He claims to stand for individual responsibility, but he refuses to pay his taxes.

He boasts about his inability to lie, but he’s been credibly accused of fraud by Canada’s professional association for massage therapists.

He touts “Judeo-Christian values” in his political life, but he profits from other people’s sex work… including his wife’s.

The hypocrisy of Regina (Saskatchewan) businessman and political candidate Trevor Wowk is on full display after a CBC News investigation unearthed a scandal in his very own home. 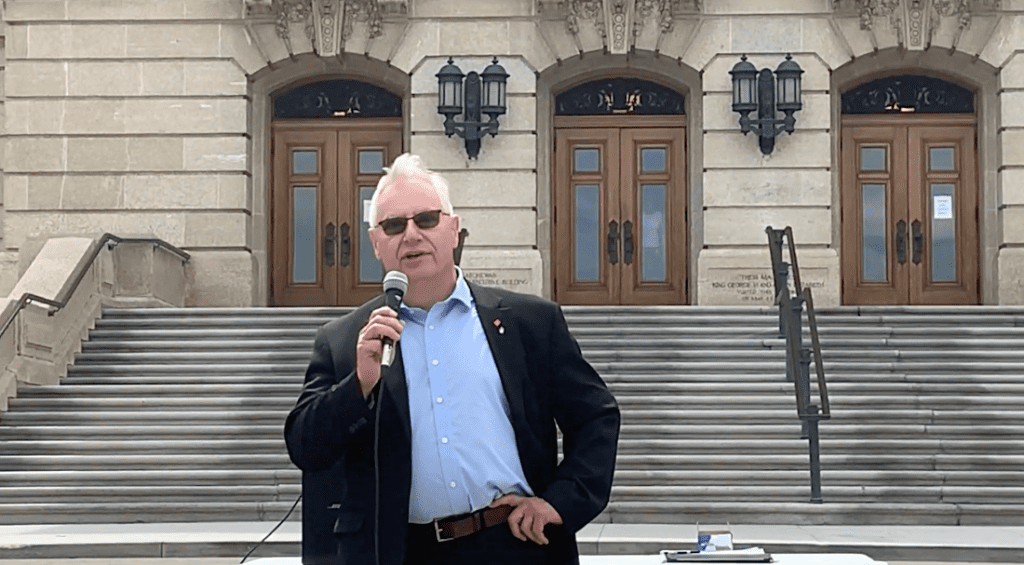 Reporter Geoff Leo discovered some incredibly damning evidence that, in the very same household where he runs the Prairie Conservative Alliance, Wowk is also operating a body rub parlor — defined in local legislation as “a place that provides or advertises massage services for sexual pleasure.”

It’s not the only one, either. Wowk claims a connection to at least 80 massage parlors across the prairies and in Ontario. The depth of his involvement in those businesses is unclear, and it’s hard to say how many offer sexual services to clients. But an undercover reporter who reached out to one of them via text was promised “very good massage with condoms, [oral sex], and having sex.”

I’m no expert, but that seems very different from the “traditional Chinese medicine” Wowk says his clients practice.

Wowk says he takes care of negotiations, marketing, and other clerical necessities for a clientele of small-business owners who speak mostly Mandarin. It’s exhausting to imagine running that many businesses, and one wonders: If these businesses were offering illicit services without his approval, would he even know? But as the CBC investigated how he and his wife run their in-home business, the man’s plausible deniability narrowed considerably.

Wowk says he met his wife in early 2020 and married her within three months. She is an immigrant from China — a strange choice from someone whose political bedfellows make such hay of the immigration question. One wonders whether his party of choice, the People’s Party of Canada (PPC), would consider her “the right kind of immigrant” to be allowed into the country.

Wowk appears to see no contradiction. He markets her under a false name — “Lily” — as “the most beautiful professional masseuse in Regina.” He pairs that ad copy with images of Lily, dressed in lingerie, provocatively posed on or beside a bed.

Granted, that proves nothing about the nature of the business. After all, sexy sells.

But when an undercover CBC reporter made contact with Lily via text message, she quoted very different prices than the advertising copy but clarified that “the full service, which starts at 2 hours, provides 2 sexual encounters… You pay for two hours, you get two times of sex.”

Explain your way out of that one, Mr. Wowk.

When Leo challenged him to do just that, however, Wowk came up with an elaborate (if hard-to-swallow) story:

Wowk confirmed that the person the CBC reporter had been texting with was his wife, on her personal cellphone, and he agreed that she was offering sex for a price. But Wowk insisted this is just “bait and switch” advertising. In other words, she was falsely promising sex for cash.

“Don’t confuse marketing for reality,” said Wowk. “I can guarantee you my wife does not provide sexual services.”

Wowk said his wife books appointments and welcomes guests to their home, in addition to modelling and texting with potential customers.

He said if the undercover reporter had arrived at his house, “Lily” would have answered the door. “She’s the one in the advertisement. They meet the woman in the advertisement and she welcomes them to the area,” he explained. “She would make sure you were comfortable, give you a glass of wine.”

Then “we would bring in an attendant who would give you a massage” and nothing more, he said.

And that’s only the salacious tip of the iceberg. In his report, Leo details a range of sins: identity theft, insurance fraud, possible immigration fraud. (He was evasive about whether Lily is legally able to work in Canada.)

Naturally, Wowk repudiates the article’s content. In a comment on Facebook, he advanced that same tired victim narrative we hear from right-wing advocates all the time: 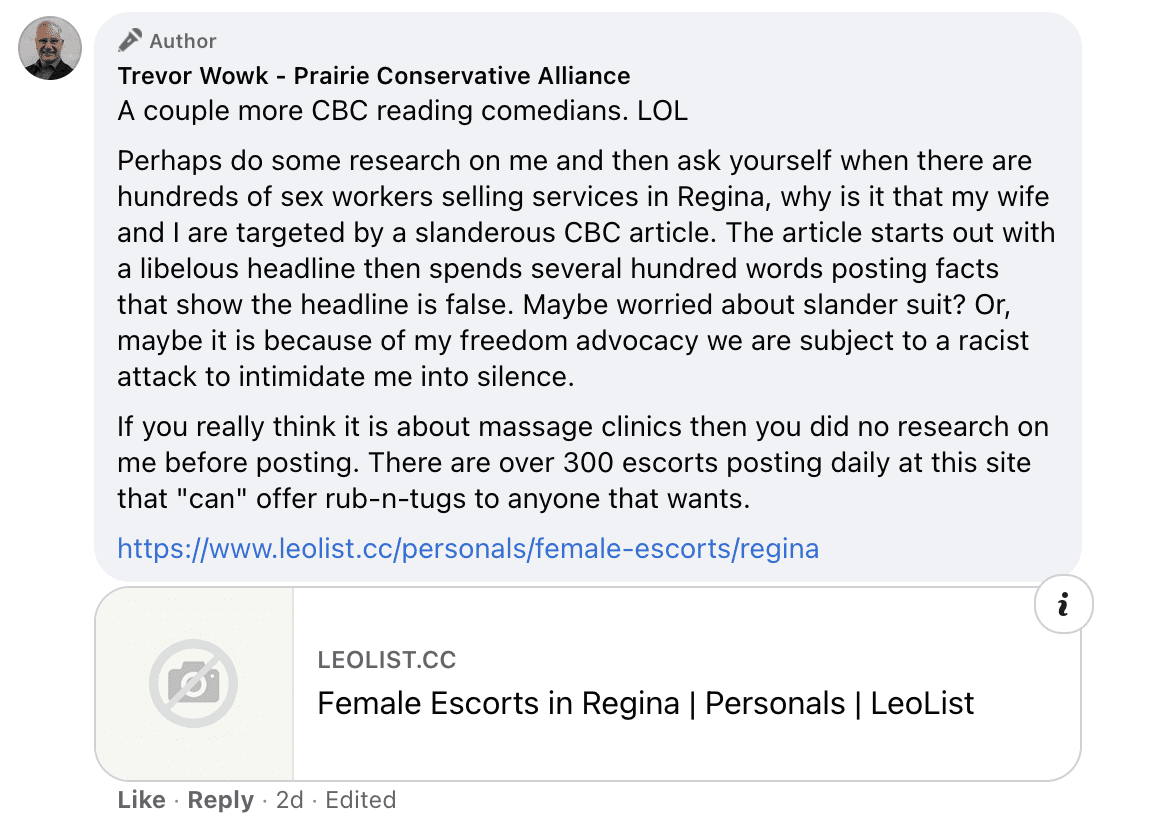 … The article starts out with a libelous headline, then spends several hundred words posting facts that show the headline is false. Maybe worried about slander suit? Or, maybe it is because of my freedom advocacy we are subject to a racist attack to intimidate me into silence.

Definitely check out the article and see for yourself what the facts really show.

Certainly others within his political sphere of influence have already taken note, and they’re not buying the persecution narrative. The anti-abortion Campaign Life Coalition, which gave Wowk perfect grades in their 2019 electoral report card, has rescinded their positive rating and deemed him “Not Supportable” for the values-conscious voter:

On May 2, 2021, allegations came out in the news media that Mr. Wowk owned a massage parlor business which engaged in prostitution. The allegations, though not proven in court, appear to be very damning.

CLC opposes prostitution as an offense to human dignity and as a result, CLC has removed the green-light rating that we had given Wowk during the 2019 federal election when he gave perfect answers to CLC’s election survey.

From an electoral standpoint, it hardly matters. The party had already barred him from candidacy in the next election. In January — well before this story broke — he received an e-mail from the PPC’s executive director:

As a result of a number of complaints received about you, PPC HQ conducted an extensive investigation into your actions as a member of the PPC. It was found that you have demonstrated a consistent pattern of poor judgment which has been deemed to be in contravention of the Party Pledge that you agreed to as a part of the Candidate Selection process in 2019.

Wouldn’t you just love to know what that’s about? It’s possible that the PPC was ahead of the media on this case… but it’s equally possible that Wowk has still more skeletons in his closet. 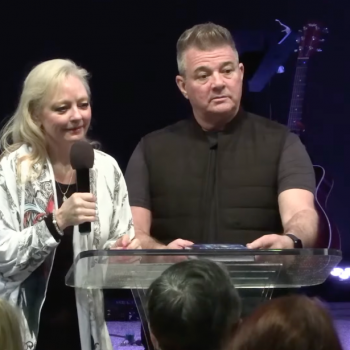 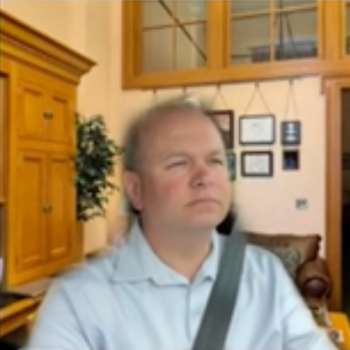