For months now, we’ve been posting about the lies spread by so-called “prophet” Jeff Jansen of Global Fire Ministries International.

This is the guy who said in February that Donald Trump was still president and would return to the White House by the summer. In March, he moved up the date to April, saying the military would help restore Trump to power. This week, he stood by that prediction… even though it’s May. He doubled down on that claim this past Tuesday… which is still part of May.

Well, here’s a bit of shocker: Jansen has now been fired by Global Fire Ministries International.

Yesterday, I received a tip that the ministry had sent the following email to members. They have not posted this for public viewing, but a spokesperson at the ministry confirmed its legitimacy to me.

A statement from the Leadership Team, Board, and Advisors of Global Fire Ministries
May 5, 2021

It is with deep sorrow that Jeff Jansen has been asked, by his board, to step down as Co-Senior Leader of Global Fire Church, and from Global Fire Ministries due to unscriptural and unbiblical behavior. He was asked to step down In April, and this was made public to the church body on May 2. 2021. A statement was released to partners and friends on May 5.

Due to a pattern of making poor moral choices, and bad coping mechanisms, character flaws became obvious which disqualified Jeff from New Testament leadership. His lifestyle in the home. traveling on the road, and in the House of God, has fallen below Biblical standards laid out for those in leadership. He has been confronted concerning these flaws numerous times over a period of time.

Rather than submit to the process of healing and restoration, Jeff recently made an intentional decision to leave his wife and family to pursue his own desires. He remains unrepentant and unremorseful.

Any pursuit of further ministry on Jeff’s behalf is not under the umbrella and blessing of Global Fire Ministries. Global Fire Church will continue to thrive! Our church was built on the importance of family and that will remain.

Your prayers for all are greatly appreciated!

Notice that none of that says they’re embarrassed by his supposed prophecies, though it possible those were a tipping point. They also weren’t bothered when he said ushers at his church would shoot anyone who tried to “pull something.” But his personal life and vague “behavior” problems were apparently too awful to ignore and they finally cut the cord.

The church did not respond to a request for more clarification as to why Jansen was fired.

As of this writing, Jansen hasn’t said anything about this situation. His latest post on Facebook involves a photoshopped image of Trump as a savior of sorts.

Whatever the case, it seems like even the self-described “prophet” didn’t see this one coming.

(Screenshot via YouTube. Thanks to Francisco for the link)

May 7, 2021
Appeals Court Tosses Conviction Due to Controversy Over Juror Who Spoke to God
Next Post 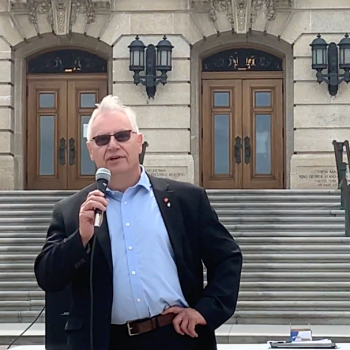 May 7, 2021 Disgraced "Family Values" Candidate Caught Selling Sex in Home Massage Parlor
Browse Our Archives
What Are Your Thoughts?leave a comment