On Wednesday, I posted about how one of the right-wing activists who celebrated the Capitol siege was former Pennsylvania State Rep. Rick Saccone, a Christian Nationalist who spent years in the state legislature trying to pass bills promoting his faith instead of helping people. He even posted a video online bragging about how he was “storming the capitol.”

… Here in front of the U.S. Capitol. Hundreds of thousands of people storming the Capitol. They broke down the gates. They’re macing them up there. We’re trying to run out all the evil people in there and all the RINOs that have betrayed our president.

Are you with me? Until next time, in God we trust.

It turns out that Saccone has been teaching history at Saint Vincent College for the past 21 years. After he gleefully celebrated the overthrowing of the government, the college began investigating him, and Saccone almost immediately submitted his resignation. Because it always looks better on a résumé if you quit before you get fired.

Saccone is now trying to walk his own actions back, saying he was just kidding around.

“After reviewing the video posted by Rick Saccone, an adjunct professor, we immediately commenced an investigation of the facts and circumstances surrounding it. As a result of that investigation, Dr. Saccone has submitted and we have accepted his letter of resignation, effective immediately. He will no longer be associated with Saint Vincent College in any capacity.”

But in a phone interview today Saccone said he wasn’t aware those things were actually happening at the time and was speaking somewhat tongue in check.

[REPORTER ANDY] SHEEHAN: “It seems you’re exhorting people to do violence.”
SACCONE: “Well it could seem like that to someone who doesn’t know me. Nobody who listens to that would think when you say ‘save the nation, drain the swamp or throw out the RINOs,’ that you’re actually going to do any physical violence. Those are figures of speech.”

“I thought with all this misconstruing going on. I love that school so much, I would do nothing to tarnish St. Vincent. So I decided it would just be better to resign at this time,” Saccone said.

They were not figures of speech. That was an attempted coup and Saccone was part of the mob storming the Capitol even if he never went inside the building.

Saccone said “We’re going to run ’em out of their offices” and that “We’re trying to run out all the evil people in there…” He said this while walking toward the Capitol alongside other rioters. His words on Wednesday matched his public character over the past several years. He wasn’t symbolically promoting Christianity while in office; he wrote up those resolutions. There’s no reason to take him at his word.

Christian Nationalists don’t get to pretend they’re exaggerating after people start quoting their extremist rhetoric back at them.

Good riddance to him. The students at the school should learn history from someone who’s not on the side of the Confederacy. 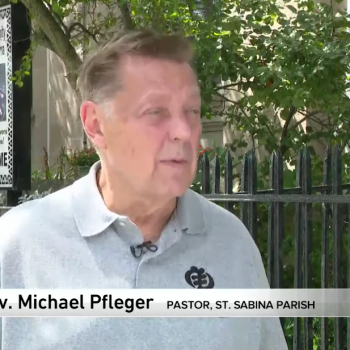 January 8, 2021 Preacher: I Prophesied Trump Would Win Again, But I Must Have Misinterpreted God
Browse Our Archives
What Are Your Thoughts?leave a comment