Amidst the attempted coup of the Capitol by right-wing terrorists, one of the participants bragging about it all is former Pennsylvania State Rep. Rick Saccone, who posted this video about how he was “storming the capitol.”

Update: He deleted the video. I saved a copy.

… Here in front of the U.S. Capitol. Hundreds of thousands of people storming the Capitol. They broke down the gates. They’re macing them up there. We’re trying to run out all the evil people in there and all the RINOs that have betrayed our president.

Are you with me? Until next time, in God we trust.

For those who aren’t familiar, Saccone, who was in the State House from 2011 to 2018 and lost a special election for Congress to Democrat Conor Lamb in 2018, was a frequent presence on this site as a Christian Supremacist who did all he could to elevate the Bible over the Constitution. Church and State were overlapping circles on a Venn diagram, in his mind, and he had some success passing resolutions elevating his faith.

In 2012, Saccone sponsored a resolution declaring it the “Year of the Bible” in Pennsylvania because it would serve “as a reminder that we must look to our faith in God and the Holy Scripture to provide us with the strength, wisdom and courage to conquer these great trials.” In 2013, He sponsored “National Fast Day,” saying we owe our “dependence upon the overruling power of God” and that the only nations that are blessed are the ones “whose God is the Lord.” That same year, he sponsored the “National Motto Display Act,” which would put the words “In God We Trust” in every public school in the state. (He later claimed the bill was “bipartisan” because a single Democrat voted in favor of it and that even atheists backed it, citing his conversation with an unnamed leader of the Pennsylvania Atheists, a group that doesn’t exist.) He also said anyone who opposed his bill wasn’t really a patriot.

In 2015, Saccone told a church audience that our nation needed to “return to God through prayer” because that was the best way to prevent the country from descending into a “culture of chaos and destructive behavior.”

And now the Christian activist is actively participating in that chaos and destruction because he’s a despicable human being who always used religion as a cover for his extremism. Atheists said that for years. Too many Christians let him get away with it.

(via @ByJohnLMicek. Large portions of this article were published earlier) 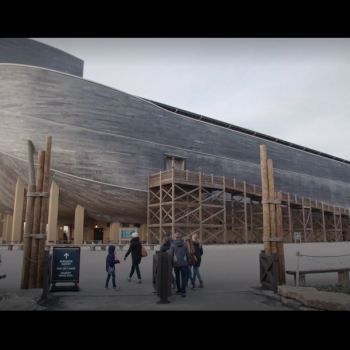 January 6, 2021
This Short Film About Ark Encounter Functions as an Unintentional Advertisement
Next Post