Kat Kerr, the self-proclaimed Christian “Prophetess” who thinks Heaven is home to cows driving tractors and a city made entirely out of Jell-O, once saw a football game in Heaven.

I have to admit, though: The rules make no sense.

… by the way, they have sports in Heaven because those people have gifts. But every sport is played for one person, and the winner in any of these sports are always Jesus Christ.

And I’m even going to share this before we go — I was taken to a football game in Heaven… Anyway, he took me to this this football game that somebody was playing. These teams of people who were football players who had a gift for playing it. But you can join in! You can join in these teams and play.

But there were three scoreboards and these teams are so, uh, focused — is a light word… — to win these sports, because when they would score, it would go to their scoreboard — that team — but then it would go up to Jesus’! Jesus had his own scoreboard, and everybody’s points, no matter who made them, they were trying to make more points for Jesus! This is how they do sports in Heaven. They all went to Jesus Christ.

And so it’s a different way to play, but the intensity and excitement is still there. All the angels, their guardian angels, are in the stands doing the wave. It’s crazy to think!

Definitely crazy… I’m right there with her.

But just so we’re clear, Kerr is not talking about sports. If two teams are “competing” against each other for the sole purpose of giving their points to a third party… it’s not a game. It’s not even purposeful. It’s just a waste of time.

If one person always wins, it’s not football. It’s an autocracy.

November 5, 2020
Right-Wing Pastor Calls on Angels to Intervene in Swing States so Trump Wins
Next Post 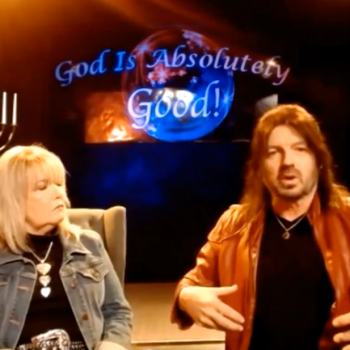