Only one party is guilty of blatant voter suppression — preventing eligible voters from voting, trying to shut down vote counting, the fake ballot boxes, etc. — but one pastor is actively asking God to help sway the election no matter what the votes say.

Pastor Robert Henderson, who said in 2019 that Donald Trump‘s re-election was already secured in “the courts of heaven” and that his prayers helped kill Ruth Bader Ginsburg, is now trying to get God to get His angels to prevent Democrats from stealing the election… by which Henderson means he doesn’t want Democrats’ votes to count.

“Let those angels, let the ones assigned go to Pennsylvania and secure that election process,” Henderson declared. “I see a boundary being set around Pennsylvania that will make that election be sure and complete, Lord God, and that there would be no ability to steal that state away in any form or in any fashion.”

“We release and commission and dispatch the angels into that place in Pennsylvania and in Michigan, Lord, and in all these states that have yet to be called, Father,” he continued. “That they would not purposefully be delayed for the purpose of fraud. We break that. We remove that. And we say the angelic powers of God oversee this. I say, Lord, you are overseeing this election from your throne … and it will, Lord, prevail in the way that you have intended.”

Considering that Michigan has already been called for Joe Biden, and that Pennsylvania is shifting in Biden’s way (as I write this), Henderson must be getting a bad signal from above.

Henderson should also remind his candidate that it’s impossible to “steal” an election before the votes are even counted since there’s nothing to steal. We must wait for the mail-in ballots because they were sent before Election Day and therefore count. Claiming victory on Twitter before all the necessary states have been tallied is irresponsible, un-Democratic, and (let’s face it) what we’ve come to expect from the sore loser that is Trump.

That said, if Henderson is asking angels to intervene in the election, then he must be on his last hope. That’s a good sign for democracy at large. 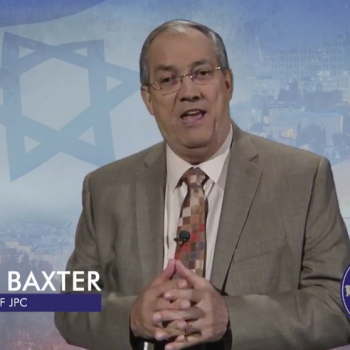 November 5, 2020
Pastor Who Blamed COVID on People Who "Committed Fornication" Dies of COVID
Next Post

November 5, 2020 Christian “Prophetess”: There's Football in Heaven and Jesus Always Wins
Browse Our Archives
What Are Your Thoughts?leave a comment