There are a handful of valid theories as to what caused the coronavirus.

Hillary Clinton and her supporters aren’t among them.

That news never made its way to televangelist Robin Bullock, who made that claim anyway during an interview with host Sid Roth on his “It’s Supernatural” YouTube channel.

“When they started putting shirts, ‘I’m With Her,’ the Lord showed me in the Book of Revelation, he said, ‘I will make a bed, and those who commit fornication with her, they will go into great tribulation,’” Bullock continued. “Then it says, ‘I will kill her children with death.’ This means a pestilence or a plague. So, when they voted for Hillary Clinton — I’m just being bold right here and telling you something — when they voted for this, the champion of abortion herself, when they voted for this, it brought the coronavirus. That’s where it came from.”

So God wanted to punish us for supporting Clinton… and He waited until the final year of Donald Trump’s presidency in order to unleash a virus that didn’t exist when people voted for her? Big “mysterious ways” vibe right there.

Best to stick to what you know, Bullock. Leave the pandemic speculation to actual epidemiologists.

Also, while we’re at it, leave the menorah for the Jews, to whom it belongs. 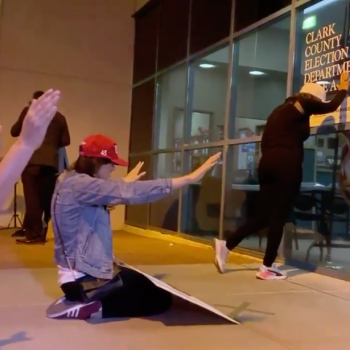