Rather than intelligently pointing out specific policy differences that he has with Democrats, Trump cultist and right-wing preacher Lance Wallnau insisted on Facebook last Friday that Kamala Harris is being used by Satan to take out Donald Trump.

Wallnau asserted that Harris is “not intelligent” but simply possesses an ability to deceive people, which is why she was chosen to serve as Joe Biden’s running mate by the “deep state” and “do what [Barack] Obama wants her to do, which is to undo Trump’s legacy.” He added that Harris is driven by a “Jezebel spirit,” which some evangelicals believe is an evil and cunning demonic female spirit intent on attacking God and those who worship him.

A preacher calling a woman “Jezebel” is like Trump calling her “nasty”: It should be interpreted as a badge of honor.

The “not intelligent” remark is especially absurd. Harris is the daughter of two immigrants with PhDs, graduated from law school, got elected to statewide posts, and is on the verge of becoming the next Vice President. Disagree with her policies all you want — plenty of progressive Democrats are right there with you — but demeaning her intelligence is downright childish.

Wallnau went on to explain a dream he had which confirmed how Harris is a tool of the devil.

“The only base that Donald Trump has are the people that are sane, but how many sane people do you know?” Wallnau asked, before recounting a prophetic dream in which it was supposedly revealed to him that Harris is a tool of the devil. “My biggest concern all along was this dream that I had. I was in an elevator with her, and I was in an elevator going up, and I knew there was a Jezebel spirit. This was before she ran for the primaries for president, so I knew all along that she was going to be the one that the devil is going to try to use to take Trump out.”

“We’re going to fight in the spirit, and we’re going to mobilize in other ways in order to do what has to be done to keep the devil from his impatient, lusting, grasping, premature seizure of power,” Wallnau declared. “I’m telling you, Kamala is Hillary 2.0. It’s the Jezebel spirit 2.0, and she has no real conscience.”

Wallnau isn’t afraid of Satan. He’s afraid of ambition, perseverance, and confidence. Smart, competent people — and the voters who support them — are the real threat to the Trump regime. But sure, blame Trump’s potential defeat on Satan. Insults are the only language his supporters understand. 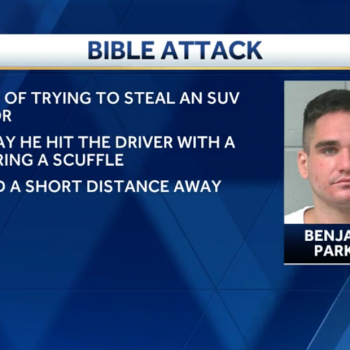 August 19, 2020
Maine Man Allegedly Threw Bible at Driver While Trying to Steal His Car
Next Post