In a bizarre story out of Bangor, Maine, a 27-year-old man used the Bible as a literal weapon during an attempted carjacking. He failed.

Over the weekend, Benjamin Parker attempted to steal a car when he saw the family stepped out to take pictures. The driver and Parker soon began fighting… and then it got even stranger. 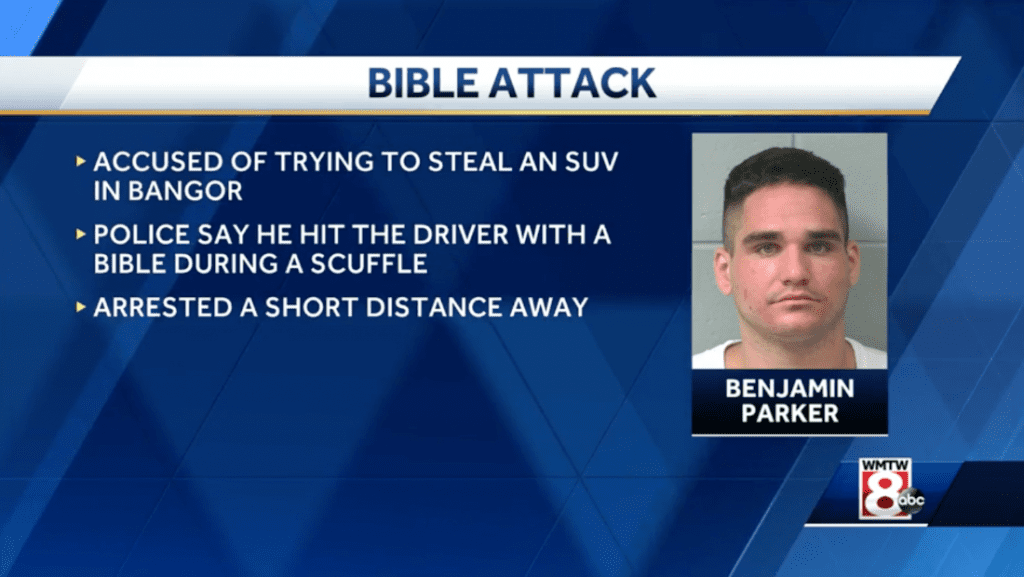 The driver of the car noticed Parker in the driver seat — police say a struggle ensued, with Parker hitting the vehicle’s owner with what was believed to be a copy of the bible.

According to authorities, Parker was pulled from the vehicle and fled on foot.

Gives whole new meaning to the idea of Bible thumping…

What kind of Bible were we talking about, anyway? One of those small green pocket ones? Or a thick hardcover? Was there seriously nothing else to use to fight with? Where does one even throw a Bible during a carjacking? I have so many questions!

Anyway, like so many people who rely entirely on the Bible to achieve a goal, he failed.

Parker was arrested and charged with robbery and assault.

The Bible was also recovered by police.

(Screenshot via WMTW. Thanks to Brian for the link)

August 19, 2020
GOP House Candidate Tried to Get Muslim Congresswomen to Retake Oath on Bible
Next Post