Last month was supposed to mark the release of an anthology series called Flashing Swords! The heroic fantasy fiction series was popular in the 1970s, and a group of writers had contributed their own short stories for a “reboot” under the editorship of Robert M. Price. 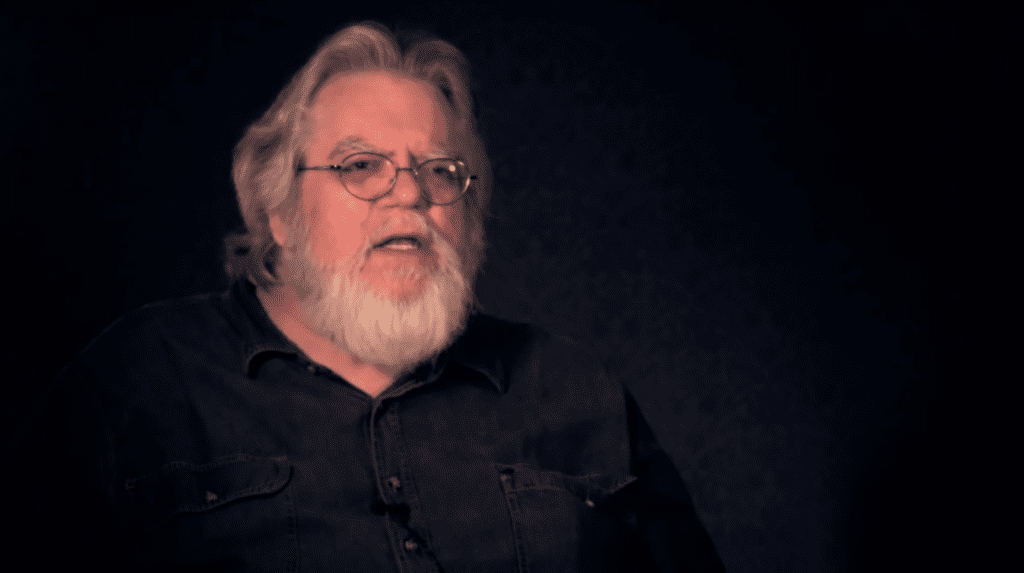 Price is an atheist who has written books like The Case Against ‘The Case for Christ’. He’s also an outspoken conservative who supports Donald Trump.

But when the book was released on Amazon, the preview available to the public included an introduction by Price that was truly disturbing. On a single page, he wrote about “continuous false rape accusations,” “man-hating” feminists, the suggestion that feminists hate pornography (as opposed to being critical of certain problematic aspects of it), and fear-mongering about the “sudden epidemic of transgendered youth.”

A number of the authors revolted. They asked for their works to be removed from the collection. They urged readers not to buy it. The publisher of the series, Bob McClain, responded to them in favorable terms. As one contributor explained:

… This morning, [McClain] approached the authors with a proposed resolution that has been accepted. Bob has confirmed that we hold the copyrights, he has confirmed cancellation of the book (even if Amazon somehow resists it, they have no copies or files to ship), and he has offered the writers a “kill fee” for the stories while allowing them to take the story to any publisher immediately. This is the best possible resolution to a situation that was as unpleasant and unexpected for Bob McClain as it was for all of us, and I appreciate his willingness to bring this to a close.

That’s the right move by McClain in response to a situation he didn’t anticipate. Even though the book is still up on Amazon, it’s listed as out-of-print and you likely won’t be able to obtain a copy.

Price reacted by posting his full foreword… though his opinions didn’t make any more sense in full context.

Now, weeks later, he’s posted another update. This time he’s blaming “cancel culture” for the reaction to what he wrote. 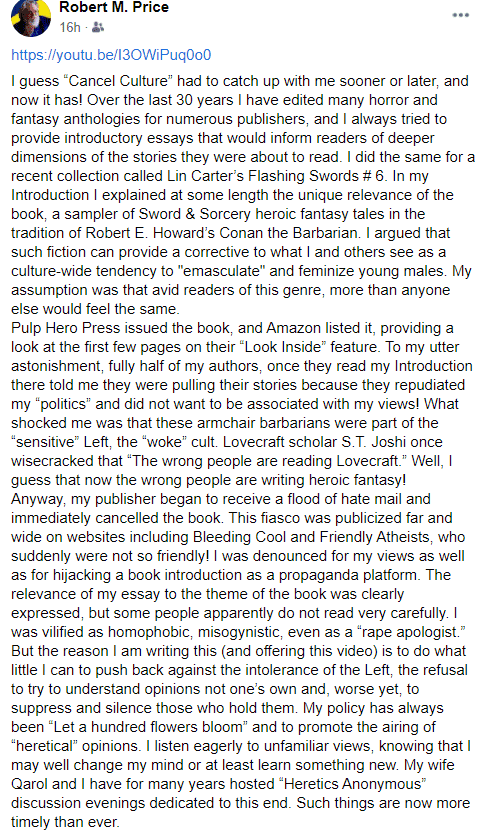 I guess “Cancel Culture” had to catch up with me sooner or later, and now it has! Over the last 30 years I have edited many horror and fantasy anthologies for numerous publishers, and I always tried to provide introductory essays that would inform readers of deeper dimensions of the stories they were about to read. I did the same for a recent collection called Lin Carter’s Flashing Swords #6. In my introduction I explained at some length the unique relevance of the book, a sampler of Sword & Sorcery heroic fantasy tales in the tradition of Robert E. Howard’s Conan the Barbarian. I argued that such fiction can provide a corrective to what I and others see as a culture-wide tendency to “emasculate” and feminize young males. My assumption was that avid readers of this genre, more than anyone else would feel the same.

Pulp Hero Press issued the book, and Amazon listed it, providing a look al the first few pages on their °Look Inside° feature. To my utter astonishment, fully half of my authors, once they read my Introduction there told me they were pulling their stories because they repudiated my “politics” and did not want to be associated with my views! What shocked me was that these armchair barbarians were part of the “sensitive” Left, the “woke” cult. Lovecraft scholar S. T. Joshi once wisecracked that “The wrong people are reading Lovecraft.” Well, I guess that now the wrong people are writing heroic fantasy!

Anyway, my publisher began to receive a flood of hate mail and immediately cancelled the book. This fiasco was publicized far and wide on website including Bleeding Cool and Friendly Atheists [sic], who suddenly were not so friendly! I was denounced for my views as well as for hijacking a book introduction as a propaganda platform. The relevance of my essay to the theme of the book was clearly expressed, but some people apparently do not read very carefully. I was vilified as homophobic, misogynistic, even as a “rape apologist.” But the reason I am writing this (and offering this video) is to do what little I can to push back against the intolerance of the Left, the refusal to try to understand opinions not one’s own and, worse yet, to suppress and silence those who hold them. My policy has always been “Let a hundred flowers bloom” and to promote the airing of “heretical” opinions. I listen eagerly to unfamiliar views, knowing that I may well change my mind or at least learn something new. My wife Qarol and I have for many years hosted “Heretics Anonymous° discussion evenings dedicated to this end. Such things are now more timely than ever.

He’s blaming the other authors — “armchair barbarians”! — for being too “sensitive” and cult-like to accept his bigoted, simplistic, and utterly flawed views. He’s suggesting I’m mean for even posting about it. He’s blaming readers for not understanding what’s he saying… even though we all knew what he was saying weeks ago, and he’s only doubled down on it since then.

Most importantly, no one’s silencing him. Price has plenty of platforms. He can spew his bile through his own books or blogs as much as he’d like. When he drags other people down into the gutter with him, though, they have every right to distance themselves from him. (It’s telling that Price sees the very existence of transgender people, among other things, as a subject for debate.)

Even in the video he released, he says that he wants boys to conform to traditional gender roles. At one point, he laments the “resistance to the military” and the rejection of boys playing with toy guns because “we’re gonna need defense, if we don’t already, with Islamic terrorism.” He adds that “we’re just softening ourselves up for the kill.”

Yikes… The idea that little boys need to see hyper-masculine macho men in their stories and fantasize about violence in order to prepare for some sort of Muslim invasion is delusional. It’s a Republican pipe dream.

But we don’t even need to be debating that. The point is that Price injected his politics in a book meant to be non-partisan and fun. The authors were unhappy about that and bailed. And instead of owning up to his role in all this, Price is deflecting blame on everyone except himself.

(Thanks to @UnashamedCommie for the link) 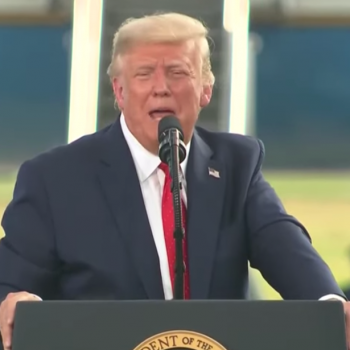