Trump Admits He Moved the U.S. Embassy to Jerusalem “For the Evangelicals” August 18, 2020 Beth Stoneburner

Trump Admits He Moved the U.S. Embassy to Jerusalem “For the Evangelicals”

When Donald Trump declared Jerusalem to be Israel’s capital and moved the U.S. embassy there from Tel Aviv, it was supposed to be a gregarious symbol of pro-Jewish sentiment. Trump himself called it a “huge victory” for Israelis.

Jews, of course, knew better and saw the move for what it was: Another attempt at brown-nosing his evangelical base, which has long wanted that move in order to supposedly hasten the Second Coming of Christ. Whether or not he cared about the theology, Trump was more than willing to do whatever those evangelicals wanted, while saying publicly that this was for the benefit of Israeli Jews (as if listening to the Jewish people is something the Trump administration has ever been good at).

But yesterday, during a rally in Wisconsin, Trump either forgot his motives or removed all pretenses when he said that stunt was all for the benefit of (white) evangelicals… and no one else:

… We moved the capital of Israel to Jerusalem. That’s for the evangelicals.

You know what’s amazing with that, the evangelicals are more excited about that than Jewish people! It’s really… right? It’s incredible, but we did that…

Finally, he told the truth. And in the process, he revealed an older lie.

Evangelical support for Israel has always been about fulfilling a prophecy from the Book of Revelation. Supposedly, once all the Jews are gathered in the Holy Land, Jesus will return — and take his followers to Heaven while the rest go to Hell.

Jews, not surprisingly, aren’t terribly fond of this theology. Nor are they wild about being used as pawns for an agenda. But white evangelicals have so carefully crafted their narrative that many of them believe criticizing Israel — as many Jews do, because they don’t all view it as a perfect, holy Utopia — is tantamount to heresy, if not some form of treason. They believe that God will bless America if and only if they prioritize a relationship with Israel (regardless of other political considerations or human rights issues). That’s why many of them get away with calling themselves “pro-Israel” and “pro-Jewish” when, really, they just want to bring about their own apocalypse.

Trump, as always, played right into their hands. Yesterday, he finally admitted it. 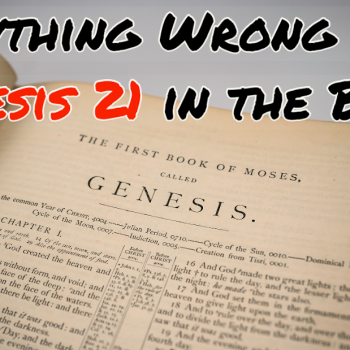 August 18, 2020 Everything Wrong With Genesis 21 in the Bible
Browse Our Archives
What Are Your Thoughts?leave a comment