Christian “Prophet”: Trump Will Be a “Great Praying President” In His Next Term April 28, 2020 Beth Stoneburner

Christian “Prophet”: Trump Will Be a “Great Praying President” In His Next Term

The last time we heard from self-proclaimed Christian “prophet” James Goll, he was explaining how God was only keeping Ruth Bader Ginsburg alive in order to give her a chance to repent before it was too late.

This time, full of sensible thoughts, Goll predicts that Donald Trump will both win a second term and become a “great praying president.”

He made the claims over the weekend during a livestream with promoter-of-all-things-supernatural Sid Roth:

“I believe it is the will of the Lord for President Trump to be reelected for a long-term reason if Jesus tarries any at all,” Goll proclaimed. “It is to turn this nation for lineage and legacy unto—this was the exact phrase the Holy Spirit gave me—to true constitutional conservatism. So I believe it’s God’s will for him to be reelected.”

Goll said that when he was visiting the Roland Reagan Presidential Library in 2019, the Holy Spirit spoke to him about Trump and what his reelection will mean for America’s future.

“He spoke something to me about later, in the middle of a second term,” Goll said. “He will become, Lord willing, in the middle of the second term, he will — there will be such an apprehension of God in his life that he won’t only have gone in by praying, he will be a great praying president who God will move on his heart, and he will be a part of welcoming in the Great Awakening.”

Goll seems to this is an endorsement for his God. It’s not. As much as I’d love to believe Trump will have an “awakening” that involves developing a conscience, a sense of moral decency, and renewed respect for the Constitution, there’s absolutely no reason to believe that would happen. We have three years in the White House and literally everything that came before that as evidence of his inability to be a decent guy.

All the more reason to not even take the chance. He can always become a “praying” citizen, on his own time, with someone else in the presidency. 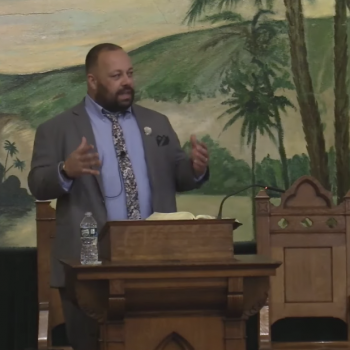 April 28, 2020 Self-Described “Prophet”: Even When My Predictions Are Wrong, They're Still True
Browse Our Archives
What Are Your Thoughts?leave a comment