Pastor Kris Casey of the Adams Square Baptist Church in Worcester, Massachusetts considers himself somewhat of a pioneer. On Sunday, after he’d prayed on it a bunch, he celebrated

Casey said 56 people attended the service, including parishioners from Worcester and surrounding communities, but also people from Boston, Lexington, Lawrence, New Bedford and other Eastern Massachusetts communities who sought a place to worship because their churches have ceased holding public services.

The pastor claims that everyone stayed six feet apart and that he provided hand sanitizer, masks, and gloves to those who hadn’t brought any. (Whether the use of those items was mandatory inside the church is unclear.)

The city was not amused and delivered a letter to Casey yesterday, pointing out that he and his congregation acted in violation of a lawful order intended to keep people from catching a serious disease. Mayor Joseph Petty said he was “deeply disappointed and dismayed” by Casey’s choice to “endanger his parishioners and our city as a whole,” and added:

“Across Massachusetts, men and women of faith have chosen to follow the best medical advice of professionals and conduct worship services virtually. This is a time when we all must make sacrifices for the good of our neighbors.”

By his actions, we know Casey doesn’t care about being a good neighbor. He cares about boosting his self-image as a warrior for the Lord. He’s conducting another in-person service tomorrow, and then another on Sunday. It’s impossible to wait, he says, even though the governor’s shelter-in-place directive is currently scheduled to end on May 4th, just six days from now. The pastor explained to a local reporter,

“This is the church God has called me to, this is the community in which I need to preach and it doesn’t make sense to preach to pews. … People go to Stop & Shop to get bread so they can eat, and yet there’s a spiritual bread that people need to survive and that’s the Gospel.”

And by God, everyone shall know it, even if Christians and non-Christians alike end up under six feet of dirt. Blusters Casey:

He thinks he’s God’s own Jack Bauer, but he’s more of a milquetoast Pennywise.

What Casey does is no different from playing Russian roulette. Were he to press the barrel against this own temple, I’d argue that that’s his right. Pointing the gun at outsiders, however, is tantamount to attempted depraved-heart murder.

Crises cause clarity. You learn a lot about people: social veneers wither, pretenses are blown, masks come off. Anyone can now see the grandstanding, Janus-faced, “pro-life” character of much of conservative Christianity.

It’s almost amusing that the heinous selfishness of these holy rollers is making people dismiss organized religion like nothing has since the attacks of 9/11. Kris Casey and Tony Spell and Kevin Stock are essentially painting FUCK YOU ALL on their church doors, and then wonder why more people don’t walk through them.

Despite everything, that part cheers me a little. 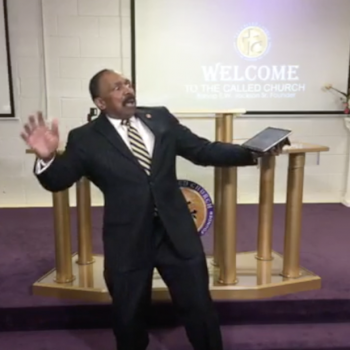 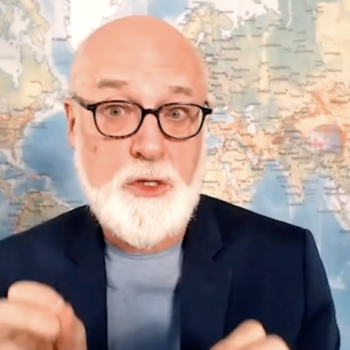 April 28, 2020 Christian “Prophet”: Trump Will Be a "Great Praying President" In His Next Term
Browse Our Archives
What Are Your Thoughts?leave a comment