At long last, Pastor Ernest Angley, the 98-year-old head of Grace Cathedral church in Akron, Ohio who admitted to having gay sex with one of his staffers in an audio recording obtained by the Akron Beacon Journal, has settled a lawsuit alleging sexual abuse.

The settlement includes a non-disparagement clause, which means neither side will be able to trash-talk the other in the future. It may be good news for the man who brought the lawsuit assuming he got money in the settlement, but it’s yet another instance of Angley avoiding true accountability for his actions.

As we’ve posted in the past, his career has been marred by a series of unethical and illegal actions.

The case that was settled last week involves a former staffer, Brock Miller, who sued for sexual abuse that occurred over the course of several years. When Miller resigned from the church, Angley’s staff told the congregation he was a liar, drug addict, alcoholic, and an adulterer.

But the allegations were mindblowing.

The first allegation of sexual misconduct Miller alleges in his lawsuit happened just prior to his wedding. Still a virgin at age 19, he had questions about sex that he wanted answered. He naturally went to Angley.

“And instead of giving me an answer like a pastor should, he said, well, I’m going to have to see your penis,” Miller recalled. “I trusted this man, I really did. I trusted him. I didn’t think he had any bad intentions.”

Brock’s moment of clarity came in Angley’s bedroom during another anointing. Laying in Angley’s circular bed, Miller naked, as usual.

“He said, ‘I’d really like to teach you how to give a good [passionate kiss] and I said, instantly, I said, No! No! And it was just like the veil was completely lifted from my eyes and I saw him in that moment for the monster that he is.”

After all that trauma, I hope Miller got the closure he needed. But terms of the settlement aside, this hardly seems like a fair punishment considering how much damage Angley has caused throughout his life.

February 18, 2020
Trump's "Spiritual Adviser" Tells Followers to Pay Her Church Before Their Bills
Next Post 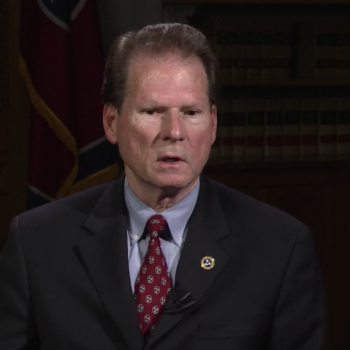