Evangelist Franklin Graham is very disturbed by the Freedom From Religion Foundation’s ad featuring Ron Reagan, seen during the recent Democratic presidential debate. That’s the one in which the son of the former president said he’s a “lifelong atheist, not afraid of burning in hell.”

In a Facebook post this morning, Graham lamented at the idea of President Reagan’s son saying such a horrible thing:

I was saddened to see the news that President Ronald Reagan’s son, Ron, Jr., is a self-proclaimed atheist, and proud of it. His father was certainly quite different — President Reagan had a deep faith in God and in His Son, Jesus Christ. Ron, Jr., was in a television advertisement to raise money for the Freedom From Religion Foundation that aired during the Democratic debate this week and got a lot of attention. He boasted in the ad that he was a “lifelong atheist, not afraid of burning in hell.” Wow. It is, of course, his choice to believe or not to believe in God and His plan of salvation through Christ. But whether an individual “believes” in God, heaven, or hell doesn’t change the reality. The Bible tells us that hell is a place of torment, fire, and separation from God — and hell awaits those who do not repent of their sin and put their faith and trust in Christ. Let’s pray that Ron will know the saving love of Jesus Christ and turn to Him before it is too late.

President Reagan, for all his flaws, still said in a speech, “We establish no religion in this country, we command no worship, we mandate no belief, nor will we ever. Church and state are, and must remain, separate.” (His definition of “separate” there is up for debate.)

It’s odd, but not surprising, that Graham is more disturbed by the idea of a proud atheist than he is by anything Donald Trump has done in the past several days (much less years). So don’t get thrown off by his supposed concern. This is the same person who thinks transgender people using the proper bathroom is some national crisis. His sense of moral decency needs serious realignment.

Ron Reagan’s atheism is also not new. He mentioned it in a New York Times interview in 2004. He alluded to it during his mother’s funeral. Even the ad that aired during the debate was filmed six years ago. As usual, Graham is just late to the party.

What Graham is saying in his post is far more offensive than anything Reagan said in that ad. Graham makes it clear that an eternity of torture awaits Jews, Hindus, Muslims, Satanists, and atheists — anyone who doesn’t subscribe to his personal brand of bullshit. The only hope everyone else has is accepting Christian mythology by the time they’re on their deathbeds.

Graham wants to threaten you with hellfire. Reagan just warned people about “the intrusions of religion into our secular government” and said, colorfully, that he’s an atheist.

Only one of those guys deserves condemnation. 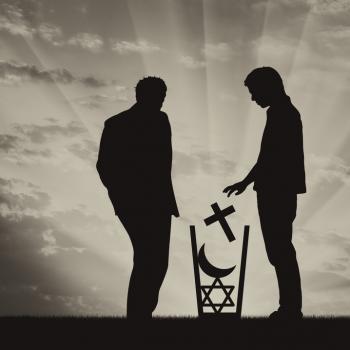 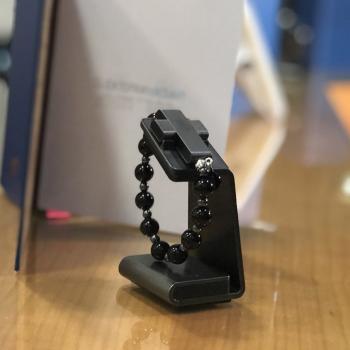