During Nancy Reagan’s Funeral, Her Son Said in His Eulogy, “I’m Not a Believer in the Supernatural” March 11, 2016 Hemant Mehta

During Nancy Reagan’s Funeral, Her Son Said in His Eulogy, “I’m Not a Believer in the Supernatural”

Earlier today, at the funeral for former First Lady Nancy Reagan, her son Ron Reagan, Jr. gave a stirring eulogy. And after sharing a few stories about her life, he made a passing reference to his own atheism (7:08 mark): 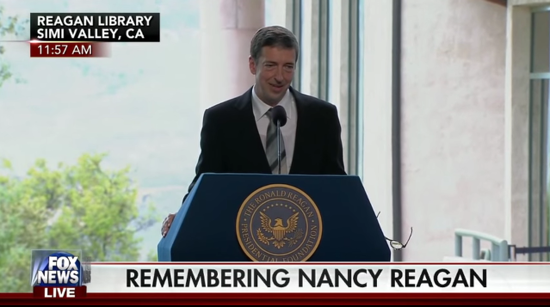 In her later years, after my father had gone, she used to ask me whether I thought she would be with him again when she died. I’m not a believer in the supernatural, but I always assured her that wherever dad had gone, she was surely going to go there, too. We should all be so lucky as to end up where we’ve always wanted to be.

Ron Reagan, Jr., of course, is a very vocal atheist. In 2014, he even starred in a television commercial for the Freedom From Religion Foundation:

In case you’re wondering, when his father died in 2004, Reagan also worked in his own thoughts about religion in the eulogy, albeit very subtly.

Dad was also a deeply, unabashedly religious man. But he never made the fatal mistake of so many politicians wearing his faith on his sleeve to gain political advantage. True, after he was shot and nearly killed early in his presidency, he came to believe that God had spared him in order that he might do good. But he accepted that as a responsibility, not a mandate. And there is a profound difference.

He’s become much more open about his atheism since 2004.

It’s tough to be an atheist at a funeral, but it’s a rare and welcome moment when a former President’s son refers to his own non-belief while the nation is watching.

(Thanks to Arlene for the link)

March 11, 2016
Why Hillary Clinton's Comments About Nancy Reagan and HIV/AIDS Were So Problematic
Next Post

March 11, 2016 Alberta Man Wants to Wear Oilers Cap in Driver's License Photo Because Hockey is His Religion
Browse Our Archives
What Are Your Thoughts?leave a comment