I have had a theory going for a while that this election has been like a deeply confusing (and very long) game of “telephone,” with a lot of people hearing and reading bits and pieces of things that may not be entirely true and just running with them. That theory was confirmed upon hearing Megan Fox‘s reaction to Trump being elected president. (She’s the mother who attempted to “debunk” the Field Museum’s evolution exhibit in 2014. Hemant interviewed her last year.) 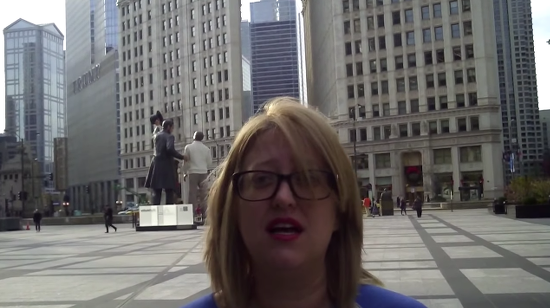 Fox, as you might imagine, is thrilled to finally able to go to downtown Chicago and proclaim her love for Trump without anyone judging her. However, living here myself, I can’t guarantee that’ll be the case. I mean, we’ll judge you for a lot of things here — walking too slowly down a busy street, standing on an escalator, putting ketchup on your hot dog, and that seems unlikely to change with anyone who voted for Trump. We also have a lot of immigrants here — heck, my whole neighborhood is made up of Polish, Ukrainian, and Mexican immigrants. We love them and we care about them. We proudly remain a sanctuary city, and we’re not going to stand for anyone making our neighbors feel uncomfortable or unwelcome.

But one aspect of her video really stands out: Fox, a walking talking encyclopedia of conspiracy theories, suggests that those of us on the left need to talk to our leaders and tell them that we do not want candidates that go to John Podesta‘s “Spirit Cooking” dinners. That, she says, was the final straw.

… I understand being upset, but what you [liberals] need to do is gather your big boy pants and put ’em on, and then get down to your Democratic national office, and demand they give you a better candidate. Preferably one who isn’t a criminal and doesn’t go to John Podesta’s “Spirit Cooking” dinners because that — that was the candle on the cake, people. That… the straw that broke the camel’s back. Don’t do that again, because that’s not gonna win it for you.

She’s referring to an email exposed during the WikiLeaks hack of Hillary Clinton‘s campaign manager in which Podesta’s brother invited him to a “Spirit Cooking” at an artist’s house… somehow, that morphed into a conspiracy theory that Hillary Clinton consumes semen and breast milk and practices Satanic rituals. Needless to say, that’s not true.

But it’s that sort of bizarre mythologizing, in no way connected to the truth, that may have been helped Trump get elected. After all, in many conservative circles, those theories, promoted by the likes of Alex Jones and alt-right websites, were accepted as fact despite the complete lack of evidence.

To some degree — a pretty high degree — social media is to blame here. Throughout the election, there was a ton of fake news going around, published on several sites (mostly conservative, but some liberal ones as well) with all the journalistic integrity of the now-defunct Weekly World News. Like Trump, these outlets told people the stories they wanted to hear, not ones that were necessarily accurate.

There have been a number of post-election “autopsies” noting this disturbing trend, and Facebook is already under pressure, even from within, to do something about it.

Of course, Donald Trump trotted out a number of falsehoods himself. Someone saying Hillary Clinton attends Satanic dinner parties seems rather quaint by comparison. And of all the terrifying things he’s already normalized, making things up, insisting they’re true, and convincing people he’s onto something may already be one of his most dangerous and lasting legacies.