Twin Cities (Minnesota) Archbishop John Nienstedt spent years arguing against LGBT rights. In 2007, he wrote that “those who actively encourage or promote homosexual acts… formally cooperate in a grave evil and, if they do so knowingly and willingly, are guilty of mortal sin.” He condemned Brokeback Mountain when it came out. And he spent $650,000 of the Church’s money trying to convince Minnesota voters to pass an amendment banning same-sex marriage — an amendment that ultimately failed. 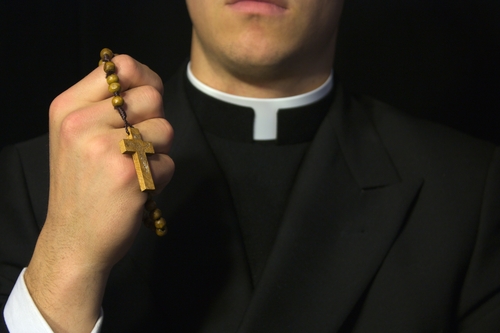 It’s hardly surprisingly, then, that Nienstedt was under investigation for having sex with other priests. More importantly, he retaliated against anyone who didn’t respond in kind or questioned what he was doing. He has long denied all of these allegations, of course.

But there was another aspect to the story that was even more disturbing: One of the men promoted by Nienstedt to become a pastor, Curtis Wehmeyer, ended up molesting kids while in that role. If Nienstedt and his colleagues knew about it and didn’t put a stop to it, they deserved to be punished.

That’s why, more than a year ago, government officials came down on the Roman Catholic Archdiocese:

Prosecutors in Minnesota filed criminal charges on Friday against the Roman Catholic Archdiocese of St. Paul and Minneapolis, accusing church leaders of mishandling repeated complaints of sexual abuse by a priest.

Though there have been several allegations of sexual abuse over the years by priests in the archdiocese of St. Paul and Minneapolis, Friday’s charges focus on the church’s handling of “numerous and repeated reports of troubling conduct” by Curtis Wehmeyer, who was dismissed as a priest in March.

Mr. Wehmeyer, 50, was sentenced in 2013 for criminal sexual conduct and possession of child pornography. He is in prison in Minnesota, and he has been charged with sex crimes in Wisconsin.

“I am deeply saddened and have been profoundly affected by the stories I continue to hear from victims/survivors of clergy sexual abuse,” the archbishop said in March. “My focus, and the focus of the Archdiocese, is to do all we can to keep children safe while offering resources for help and healing.”

They did a horrible job of keeping children safe. And now it has finally caught up to them.

The archdiocese, one of 15 U.S. Catholic districts and religious orders driven to seek Chapter 11 protection by the church’s sex abuse scandal, said its plan would mark the second-largest such bankruptcy settlement of pedophile priest claims in America.

But lawyers representing the bulk of nearly 450 claims at stake in St. Paul-Minneapolis denounced the latest proposal as still far too small and accused church officials of trying to conceal their ability to pay much more.

This isn’t a done deal yet, but it’s unlikely that the settlement amount will be any less than $132 million. It’s also another sign that the Catholic Church is far from getting past this scandal and moving forward. The repercussions continue to be felt within the Church while the victims continue to seek some measure of closure.