In this absurd video, supposedly taken this week from a science faculty meeting at the University of Cape Town (South Africa), one student pleads with the professors to ditch science entirely because it’s a product of Western culture and doesn’t incorporate the supernatural ideas that many Africans believe. 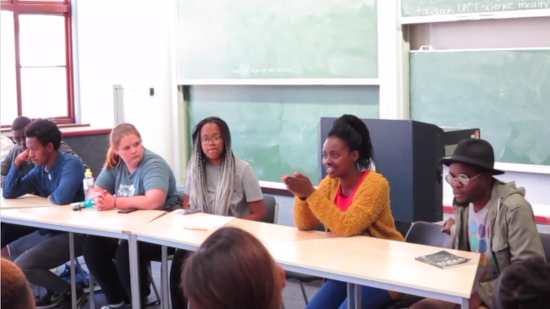 I transcribed the student as best I could:

… If I, personally, were committed to enforcing decolonization, science as a whole is a product of Western modernity, and the whole thing should be scratched off…

So if you want practical solutions to how to decolonize science, we have to restart science from, I don’t know, an African perspective, from our perspective, how we’ve experienced science.

For instance, I had a question for all the science people… there is a place in [unintelligible] and they believe that through the magic, the black magic… that you are able to send lightning to strike somewhere. So can you explain that scientifically?

[Person in the crowd: It’s not true!]

… See, that very response is the reason why I am not in the science faculty. I did science throughout my high school years… and there was a lot of things that I just… But Western modernity is the direct antagonistic factor to decolonization because wasted knowledge is totalizing.

It is saying that it was Newton, and only Newton, who knew or saw an apple falling, and then out of nowhere, decided that gravity existed, and created an equation, and that is it for the rest… whether people knew Newton or not, or whether whatever happens in Western Africa, Northern Africa… the thing is, the only way to explain gravity is through Newton, who sat under a tree and saw an apple fall.

So wasted modernity is the problem that decolonization directly deals with to say that we are going to decolonize by having knowledge that is produced by us, that speaks to us, and that is able to accommodate knowledge from our perspective.

So if you’re saying that you disagree with her approach, it means that you are vested in the Western and U.S.-centric way of understanding, which means you yourself still need to go back, internally, decolonize your mind, come back and say, “How can I re-look at what I’ve been studying all these years because Western knowledge is very pathetic to say the least?” I, from a decolonized perspective, believe we can do more as… knowledge producers, as people who are given the benefit to reason or whatever is that people say we do when we think or rationalize.

So decolonizing the science would mean doing away with it entirely and starting all over again to deal with how we respond to the environment and how we understand it. Thank you.

So… that student thinks scientists believe in gravity, not because all the evidence ever found points to it being real, but because of the story of Isaac Newton (which, by the way, is exaggerated).

She fails to understand that science isn’t some Western conspiracy, but a method of understanding the world that takes into account evidence and reason. It can already self-correct when additional, credible information comes into play. There’s no “Western” science or “African” science. There’s just good science and whatever the fuck Ken Ham believes.

We don’t need to “restart” science. We need to build upon what we already know.

People may believe in nonsense (like black magic), but that doesn’t mean their ideas need to be taken seriously. We can test their theories. We can find out if there’s any validity to them. That’s not a bug for science; that’s a feature. We can say exactly why, in the words of that audience member, it’s not true.

Science doesn’t need to change. But students like her sure as hell do. How awful were her high school science classes that this is the mindset she came away with?

Everyone wish the professors at Cape Town the best of luck. They have their work cut out for them.

By the way, there’s plenty more discussion about this video under the hashtag #ScienceMustFall.

October 14, 2016
New Hampshire House Candidate on Marriage Equality: "Do We Allow Humans To Marry Their Pet Goats?"
Next Post