Internet Evangelist (Who Makes $50,000/Month) Says Not Donating to Her Is Like Starving a Child June 23, 2016 Hemant Mehta

Internet Evangelist (Who Makes $50,000/Month) Says Not Donating to Her Is Like Starving a Child

Anita Fuentes is an online evangelist who needs more of your money.

In fact, not giving her your money is like starving a child, a comparison she literally makes in a YouTube video explaining why you should give her money. She followed that up by saying not giving her money was like a boss telling an employee he wasn’t receiving a paycheck because he wasn’t worth it. 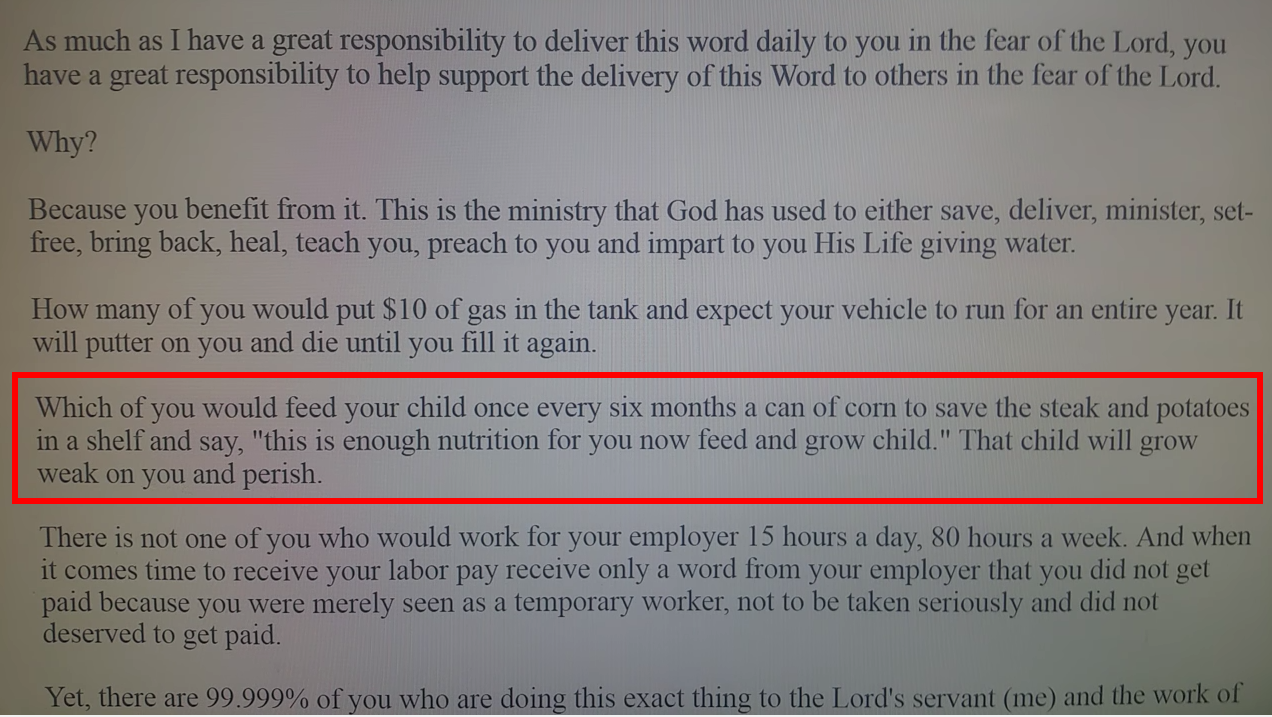 It’s only fair to ask where all this money is going since she says it’s vital to her ministry.

Because despite making $50,000 a month — that’s not a typo; she says it in the video — she still hasn’t gotten around to upgrading her website from what I can only assume is 1997.

Her YouTube videos — at least the ones she still has up — consist of nothing more than putting a camera on her computer screen as she scrolls down a Word document, so it’s not like the money is being used for video production.

Her $100 ordinations, which have as much authority as the “Official Atheist” cards I should totally sell, look like a third grader designed them.

She’s not taking any science classes, considering she predicted the End of the World was going to happen on March 8 because of an asteroid.

And she’s apparently not paying someone to manage her business, since the state of California says her company was dissolved in 2014:

(It’s possible she works under another name now, though I can’t find proof of that anywhere.)

I guess the request angered enough people that Fuentes issued an update shortly after that video went up. She criticized her critics for speaking to her “in a way that even a dog would not deserve,” adding that, “I can now see why Jesus will vomit some of you out of His mouth.”

She writes at the end:

No, we will not show you our finances

No, we will not show you our expense reports.

She’s under no obligation to do either of those things, of course, but it would certainly help alleviate the accusations she’s just in this for self-serving reasons.

But that would never happen with someone who preaches the Word of God, right?

By the way, as someone who works online, I have no problem with preachers who make money from what they do. The biggest issue here is the guilt trip she’s putting on her followers, suggesting that they’re doing something incredibly harmful by not giving her what she believes she deserves… which always happens to be more than whatever she made yesterday.

June 23, 2016
Egyptian Islamic Leader: The World is Less Religious Because Atheists Are Too Damn Reasonable
Next Post

June 23, 2016 Devotional Singer Is Assassinated in Pakistan For Insulting Allah With Music
Browse Our Archives
What Are Your Thoughts?leave a comment