Christian Pastor, Clearly Overcompensating for Something, Shoots at a Tree to Scare Off Terrorists May 9, 2016 Hemant Mehta

Christian Pastor, Clearly Overcompensating for Something, Shoots at a Tree to Scare Off Terrorists

Pastor Andrew Green, a man clearly making up for his shortcomings elsewhere, posted a video explaining what he’d do if he was ever “CONFRONTED BY A MURDERING TERRORIST.” (And you know he’s serious because Jesus is sitting on his Caps Lock key.)

The answer involves shooting at a brown tree covered with a plaid shirt hanging in front of it. 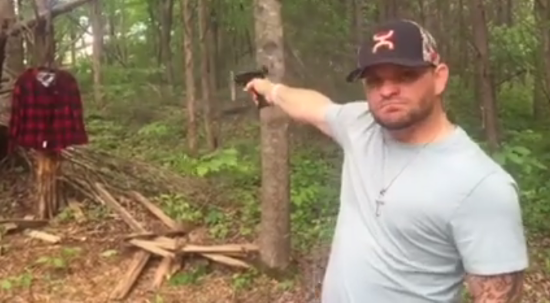 Given how some suicide bombers tend to wear explosive devices and shrapnel on their bodies, Green’s shots would likely backfire on him, and I’m guessing the terrorists won’t just sit there quietly while he shoots at them from point blank range… but Green doesn’t strike me as the kind of guy who thinks through much of anything. (I’m sure the terrorists are going, “Oh no! Bullets! We didn’t think about those!”)

But this is modern Christianity for you. Forget turning the other cheek. Forget treating people with respect and dignity. Just grab a weapon, act like you’re tough, and yell the word “Jesus” a lot. And if people stop paying attention, go after red cups at Starbucks.

Maybe the most telling exchange on Facebook is this one:

Yeah! What did you not understand about “murdering terrorist”?!

By the way, a glance at his YouTube channel shows an affinity for vertical videos. I think we know who to blame for that.

May 9, 2016
Evangelical Pastor Robert Morris: My Prayers Can Help Infertile Women Have Babies
Next Post