Math Is the New Terrorism

Via CBS and the Associated Press:

An Ivy League professor said his flight was delayed because a fellow passenger thought the math equations he was writing might be a sign he was a terrorist. American Airlines confirms that the woman expressed suspicions about University of Pennsylvania economics professor Guido Menzio. … CBS Philadelphia reports the woman was sitting right next to Menzio and became alarmed when she looked over and saw him trying to relax by doing math. 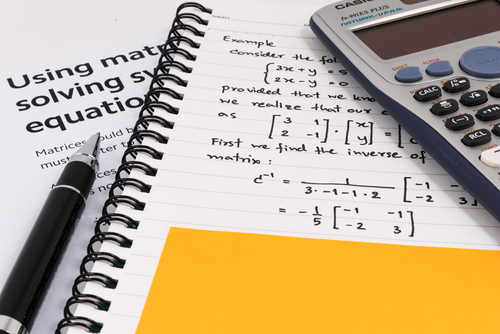 Menzio said he was flying from Philadelphia to Syracuse on Thursday night and was solving a differential equation related to a speech he was set to give at Queen’s University in Ontario, Canada. He said the woman sitting next to him passed a note to a flight attendant and the plane headed back to the gate.

The woman indicated she was too sick to fly. According to American Airlines, that was the reason the plane temporarily returned to the gate. Whether she feigned illness to avoid flying with a “terrorist” is anyone’s guess.

Menzio, who is Italian and has curly, dark hair, said the pilot asked for a word and he was questioned by an official. “I thought they were trying to get clues about her illness,” he told the Associated Press in an email. “Instead, they tell me that the woman was concerned that I was a terrorist because I was writing strange things on a pad of paper.”

The way I see it, it’s the logical outcome of a nationwide Chicken-Little security mentality in which authorities never tire of telling us, “If you see something, say something.”

Interestingly, there seems to be something about math, even just basic counting, that unsettles some people. In 2008, the New York Times reported that the city’s Metropolitan Transportation Authority, which owns the rights to the “see something, say something” slogan, crowed that in the previous year,

“1,944 New Yorkers saw something and said something.”

Well, what did those people see?

[N]o terrorists were arrested, but a wide spectrum of other activity was reported. The vast majority of calls had nothing to do with the transit system. … Eleven calls were about people seen counting in the subway, which was interpreted as ominous by some. …

All together, calls to the hot line, 1-888-NYC-SAFE, have resulted in 18 arrests by the New York police over the past two years; none have revealed a direct connection to terrorism.

‘See Something, Say Something’ Campaign Creates Massive Database Of Useless Info From Citizens Spying On Each Other

Perhaps security expert Bruce Schneier, a fellow at Harvard’s Berkman Center and a board member of the Electronic Frontier Foundation, said it best, back in 2010:

If you ask amateurs to act as front-line security personnel, you shouldn’t be surprised when you get amateur security. … [T]he slogan is nothing more than an invitation to report people who are different.

May 9, 2016
Christian Pastor, Clearly Overcompensating for Something, Shoots at a Tree to Scare Off Terrorists
Next Post