This Chiropractor Cracks a Baby’s Back in This Highly Disturbing Promotional Video April 24, 2016 Hemant Mehta

The science behind chiropractic, with an arguable exception or two, is virtually non-existent. Manipulating your spine doesn’t “cure” anything. There’s a reason your chiropractor didn’t get a degree from a medical school. And if you’re seeing one for any reason beyond back pain, you’re wasting your money.

But adults are allowed to throw their cash away and put themselves in harm’s way. What’s really messed up is when they subject their children to the same thing.

What’s worse than that is when they allow a chiropractor to “adjust” the spine of an infant. That’s what Australian practitioner Ian Rossborough does in the video below to a baby that was born two weeks prematurely and is only four days old. (The full video is here.)

It’s not for the squeamish. 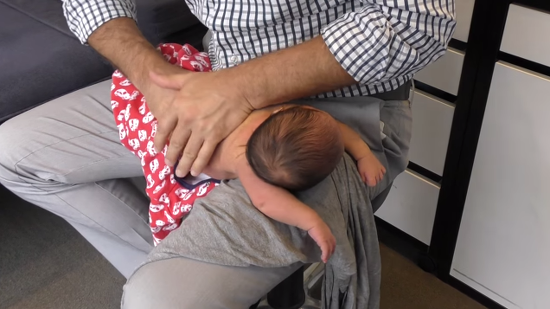 I don’t know how any decent parent can hear the *crack* and think, “Great! Everything’s fine now.”

According to the video description, that baby had “terrible colic and reflux,” wasn’t sleeping through the night, was “unsettled” after feedings despite wanting more, and hated spending time on her stomach.

A week after that video was shot, the baby was supposedly doing just fine — as if the spinal adjustment did the trick.

There’s as much credibility to that idea — and just as much proof that Rossborough is directly responsible for the healing — as you’ll find in a Benny Hinn faith-healing video.

Incidentally, readers of this site know I had a baby a little while ago. She was also born two weeks prematurely, had a major reflux problem, wasn’t sleeping well (and, nearly six months later, still hasn’t gone a full night without waking us up), and isn’t a fan of extended tummy time.

Most of these things aren’t problems with our baby. Most of these things are just parts of being a baby. Babies cry. They don’t sleep well. They spit up a lot. That’ll all go away in time. Meanwhile, cracking the baby’s spine won’t do anything helpful, but could cause serious damage. (The Mayo Clinic also points out that the cause of colic isn’t known.)

In 2013, an Australian chiropractor broke an infant’s neck. A few years ago, a six year old child’s stroke was linked to an adjustment done by a chiropractor. There are also incidents were adults have died from a stroke shortly after having a chiropractor “adjust” them.

For what it’s worth, there’s a movement in Australia to ban chiropractic treatment for children:

‘AHPRA and the Chiropractic Board, should be banning any treatment of children and adolescents under the age of 16, 17, until the evidence is available that shows that there may be some effect,’ [head of pediatrics at Royal Darwin Hospital, Dr. Paul] Bauert says.

‘The only evidence that’s available at the moment, looking at all the published chiropractic literature, the conclusions of all of those studies say that chiropractors may compete with physiotherapists in terms of treating some back problems. But all their other claims are beyond belief, and can carry a range of significant risks.’

Whether that proposal will be adopted remains to be seen. But it’d be a smart policy decision.

Needless to say, what Rossborough is doing to that baby in the video should be criminal. What’s even more amazing is that some people pay him to perform that procedure on their newborns.

April 24, 2016
National Geographic Takes a Look at the Spread of the "Religion" Called Atheism
Next Post