National Geographic Takes a Look at the Spread of the “Religion” Called Atheism April 24, 2016 Terry Firma

Can we trust National Geographic to take a truthful, fact-based look at atheism? I was, honestly, a little skeptical. 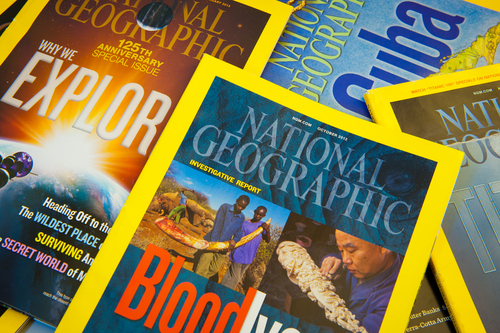 A month ago, Jerry Coyne aptly expressed how the long-fantastic magazine has been trafficking more and more in religious flim-flam.

Over the past year, I’ve taken note of (and been appalled by) the tendency of National Geographic to write uncritical articles about religion, miracles, and God. When I was young it was a magazine I’d devour avidly, for it was full of natural history, fantastic photographs, and travel stories.

Now under the aegis of Rupert Murdoch, the magazine and its parent organization are increasingly going the route of writing about religion. You can’t lose with that, right? Far more Americans want reassurance of eternal life than more information about deep-sea fish.

That trend notwithstanding, the publication now has a 2,000-word piece about atheism under the somewhat taunting headline “The World’s Newest Major Religion: No Religion.”

So we’re not off to a good start.

I wonder if any serious major publication would refer to people who don’t play sports as athletes, but that is essentially what NatGeo is doing here. Atheism is no more a religion than off is a TV channel, than being bald is a hairstyle, and than not-collecting-stamps is a hobby. People who assert that atheism is a religion either haven’t given it much thought or are trying to get a rise out of atheists.

Thankfully, it gets a lot better from there. In fact, the article is, I think, a fair look at the current state and future of godlessness. (Not that it’s perfect — but I don’t think it’s half as bad as Coyne, in a choleric new post, makes it out to be.)

Author Gabe Bullard mentions the sucker punch that the Internet dealt to religious doctrines of all kinds; that hateful religious-freedom bills seem to be driving more fence-sitters into the non-believers’ fold; how hard it is for secularists to organize (“herding cats”); why women and people of color have generally found it harder to identify as atheists (thus explaining the overall white-male-ness of the atheist movement); the fact that none of the current frontrunners for the U.S. presidency seem to be particularly religious; and many other worthwhile data points.

The nut graph is this one:

There have long been predictions that religion would fade from relevancy as the world modernizes, but all the recent surveys are finding that it’s happening startlingly fast. France will have a majority secular population soon. So will the Netherlands and New Zealand. The United Kingdom and Australia will soon lose Christian majorities. Religion is rapidly becoming less important than it’s ever been, even to people who live in countries where faith has affected everything from rulers to borders to architecture.

On the other hand,

[N]ones aren’t inheriting the Earth just yet. In many parts of the world — sub-Saharan Africa in particular — religion is growing so fast that nones’ share of the global population will actually shrink in 25 years as the world turns into what one researcher has described as “the secularizing West and the rapidly growing rest.”

All true, and on-point.

If I allow myself one more niggle, Bullard uses a throwaway phrase that seems to carry the same jolly condescension that also characterizes that crappy headline. He writes that secularists are

… united by a common belief that they do not believe.

Is the implication that we only think we don’t believe? That deep down inside, there’s faith in all of us heathens? (If so, it’s probably hidden beneath all that anger at God, in the emptiness that is our shriveled-up soul.)

I certainly like the conclusion of the piece, though:

For all the work secular groups do to promote acceptance of nonbelievers, perhaps nothing will be as effective as apathy plus time. As the secular millennials grow up and have children of their own, the only Sunday morning tradition they may pass down is one everyone in the world can agree on: brunch.

I e-mailed Bullard to ask him to respond to my criticism of the headline and his oddly phrased “common belief” comment. He replied:

“The goal of the headline (not a taunt by any means!) and the phrasing throughout the piece was to reflect the surprising growth of atheists, agnostics, and those who prefer not to state a religious preference. Rather than imply that this group is a religion, I wanted to show that those who don’t fall into one of the major religious categories make up their own category, and it’s a category that deserves attention, just like the others. It’s more demographics than faith, I’d say. I think this shift in how people identify themselves spiritually is fascinating and worthy of discussion on sites like ours and yours.

As for the “united by a common belief that they do not believe” phrasing, part of this was me having a little fun with the language and the oft-repeated “believers vs. nonbelievers” dichotomy that I wanted to move beyond in the article.”

April 24, 2016
Islamic State Takes Credit for Murder of Bangladeshi Professor, Saying He Was "Calling to Atheism"
Next Post