An organization of pediatricians has issued a damning report against the very notion of gender identity, saying that letting children “pick their gender amounts to child abuse.” 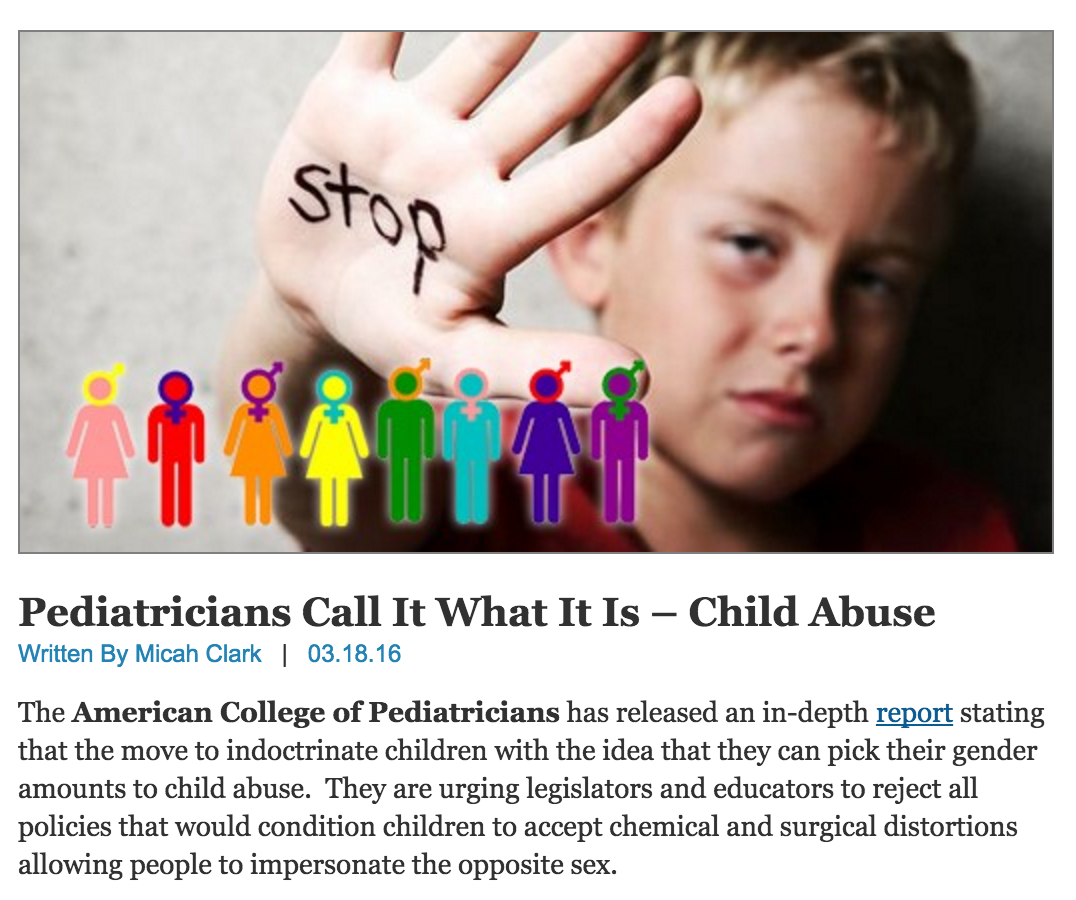 The American College of Pediatricians issued a strong recommendation based on their report:

They are urging legislators and educators to reject all policies that would condition children to accept chemical and surgical distortions allowing people to impersonate the opposite sex.

The Religious Right has been saying this for years, and now they have a professional organization backing them up. Unbelievable, isn’t it?

Because the American College of Pediatricians isn’t a legitimate organization dedicated to science. It’s a conservative group consisting of a couple hundred members (tops) that requires prospective members to accept a certain set of ideologies.

If you’re looking for the organization that represents what the best pediatricians in the country have to say, you’d want to check out the American Academy of Pediatrics. That’s the organization with more than 60,000 members and trusted by scientists everywhere.

The ACP decided more than a decade ago to mimic the name, website, and mission of the AAP in order to trick people into accepting their recommendations on everything from abortion policy to LGBT issues.

So back to this conservative group. What do they say about gender identity and transgender issues? Here’s just a sampling of their claims:

7. Rates of suicide are twenty times greater among adults who use cross-sex hormones and undergo sex reassignment surgery, even in Sweden which is among the most LGBQT – affirming countries. What compassionate and reasonable person would condemn young children to this fate knowing that after puberty as many as 88% of girls and 98% of boys will eventually accept reality and achieve a state of mental and physical health?

That suggests the hormones and surgery cause the suicides.

The truth is the suicide rates are higher because transgender kids are more likely to be bullied, beaten, and shunned by the general public. Conservatives deserve a lot of the blame for that. But the ACP insists it’s the hormones. Nothing else.

What do the (actual) experts at the American Academy of Pediatrics have to say about that?

There is no way to predict how a child will end up identifying him or herself later in life. This uncertainty is one of the hardest things about parenting a gender non-conforming child. It is important for parents to make their home a place where their child feels safe and loved unconditionally. Research suggests that gender is something we are born with; it can’t be changed by any interventions. It is critically important that children feel loved and accepted for who they are.

It goes on like this for a while. For every bullshit claim made by the conservative group, the real experts say something different (and only they have credible research to back it up).

You might ask: Are the members of the conservative ACP group actual doctors? Yes they are. But there are also Ph.D.s who work at the Creation Museum. It doesn’t mean they’re great scientists. (See: Carson, Ben.)

The question you should be asking is what does it take to become a member of the two groups? Outside of membership dues, the AAP just requires you to have proper credentials, whether you’re a board certified physician or a medical student.

The conservative ACP group requires you to accept the follow mission/vision statements:

The Mission of the American College of Pediatricians is to enable all children to reach their optimal physical and emotional health and well-being. To this end, we recognize the basic father-mother family unit, within the context of marriage, to be the optimal setting for childhood development, but pledge our support to all children, regardless of their circumstances.

The American College of Pediatricians promotes a society where all children, from the moment of their conception, are valued unselfishly. We encourage mothers, fathers and families to advance the needs of their children above their own. We expect societal forces to support the two-parent, father-mother family unit and provide for children role models of ethical character and responsible behavior.

In other words, if you think gay parents aren’t a problem, say sex positivity is healthy, and believe women should have the right to an abortion, you’re not allowed to be a member. They’ve already made those decisions for you. That’s why they say things like induced abortions lead to breast cancer, even though we know that’s not true.

It’s not about following the research where it leads. It’s about promoting certain beliefs regardless of what the evidence says. That’s the very opposite of what any professional organization should be doing.

(Dr. Francis Collins, the evangelical Christian who runs the National Institutes of Health, once chastised the ACP for taking his words out of context to promote their anti-gay ideology.)

So don’t fall for what the American College of Pediatricians says about anything. It’s a sham group created to promote ideology not backed up by any credible science.