Kristin Cavallari, a celebrity who’s basically famous for being famous, writes in her new book Balancing in Heels that she fed her newborn baby a kind of homemade formula that included goat’s milk. It’s the latest in a string of awful decisions that includes not vaccinating her children because she fears they’ll become autistic (a link that’s never ever ever been found). 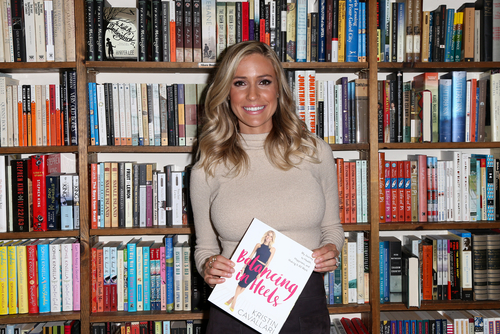 To make matters worse, People magazine ran an article about Cavallari’s latest attempt to harm her children in a section of the website called “Great Ideas”:

… She uses [the goat’s milk-infused formula] once she’s stopped breastfeeding and has run out of her own frozen milk.

Because her sons have “sensitivities to cow’s milk,” the former Laguna Beach star — who takes an anti-vaccination stance — uses goat’s milk powder for her homemade formula. Other ingredients include organic maple syrup and cod-liver oil.

In a stunningly idiotic move, the article included the recipe Cavallari mentioned in the book, you know, just in case parents wanted to make their own. (Writer Ana Calderone added that some pediatric experts warned against giving babies goat’s milk, which is important to note, but it makes the inclusion of the recipe that much more questionable.)

The American Academy of Pediatrics explicitly mentions goat’s milk in a list of things you should not give your babies:

If that’s the case, why would Cavallari give it to her babies?

According to one source, the same article in People quoted Cavallari’s reason: “[She] prefers to know every ingredient that goes into the foods she feeds her family — especially when it come to baby formula… I would rather feed my baby these real, organic ingredients than a heavily processed store-bought formula that contains ‘glucose syrup solids’…”

Just because something is organic and “pure” doesn’t mean it’s good for your child. Again, the pediatricians who study this stuff for a living say you shouldn’t do this. Check out what one article in the journal Pediatrics listed as the consequences of feeding babies goat’s milk:

It’s one thing for a celebrity to offer shitty parenting advice in her book. It’s another for a magazine to perpetuate that bad advice as a “Great Idea.”

After a lot of pushback from readers, People finally took down the article (though you can read a cached version of it here and here).

That won’t undo all the damage, though. The recipe isn’t being taken out of Cavallari’s book, and it’s not like her editors included any noteworthy disclaimer about how using goat’s milk could seriously damage your babies. At best, Cavallari says she’s not a doctor and you should always consult your pediatrician , but that’s the sort of fine print people always ignore.

This is the danger of celebrity. Some people are lucky enough to have a large platform and they wrongly assume everything they say from it must be valid because it’s coming out of their mouths. Donald Trump and Sarah Palin are perfect examples of that. But we’ve seen it from reality TV and movie stars, too.

Between Gwyneth Paltrow and Jenny McCarthy and Cavallari, the lesson is clear: Just because they’re selling advice doesn’t mean they know what the hell they’re talking about. Fame hasn’t cured their ignorance, and money clearly hasn’t bought them access to doctors who have their children’s best interests at heart.