Why Hillary Clinton’s Comments About Nancy Reagan and HIV/AIDS Were So Problematic March 11, 2016 Hemant Mehta 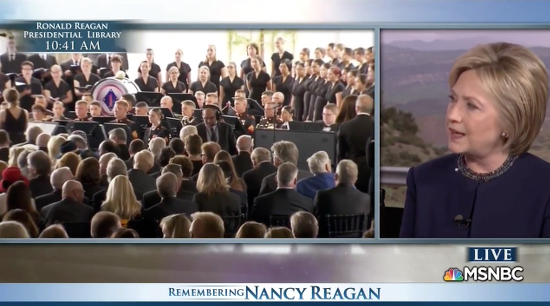 It may be hard for your viewers to remember how difficult it was for people to talk about HIV/AIDS back in the 1980s. And because of both President and Mrs. Reagan, in particular Mrs. Reagan, we started a national conversation when before, nobody would talk about it, nobody wanted to do anything about it, and, you know, that, too, is something that I really appreciate with her very effective, low-key advocacy, but it penetrated the public conscience and people began to say, “Hey, we have to do something about this, too.”

It must have been low-key, since no one can remember it.

Sure, Clinton wanted to say something nice about her recently deceased predecessor, but she did it by revising history. You can’t whitewash all the damage the Reagans did regarding HIV/AIDS issues in the 1980s.

As the Guardian points out:

Ronald Reagan, who died in 2004, was president for nearly five years before he said the word “Aids” in public, nearly seven years before he gave a speech on a health crisis that would go on to kill more than 650,000 Americans and stigmatize even more.

In recent months, published reports have revealed an administration that laughed at the scourge and its victims and a first lady who turned her back on Rock Hudson, a close friend, when he reached out to the White House for help as he was dying from an Aids-related illness.

The Reagans could have done something. They didn’t. They turned their backs on a segment of America that desperately needed them.

What’s even more disturbing is how calmly and confidently Clinton spoke about Nancy Reagan’s non-existent advocacy. Either she lies with ease (which I know many critics already think) or she genuinely misremembers recent history. Neither option makes me want to support her.

Hillary Clinton’s statement on her comments about the Reagans' record on HIV and AIDS: pic.twitter.com/RtIs0zpJfk

But how helpful is that? It’s not enough to just take back the comment. What we ought to do is rehash all the homophobia that led to the Reagan’s inaction, since that anti-gay mindset is still very much alive in the current Republican Party. Every GOP President candidate opposes marriage equality and most would overturn the Obergefell decision if they had the power to do it.

You know, we criticize the Republicans for their science denial. Just last night, we saw how even Marco Rubio refused to admit man has any impact on climate change despite all the scientific evidence to the contrary. Ted Cruz is a walking Texas science textbook. And Donald Trump will believe anything you tell him — the less sense it makes, the better.

It’s not just science. They deny reality. And they deserve the criticism.

And that’s what Clinton did this morning. She denied reality. Even if it was unintentional, she sent a message to the hundreds of thousands of people who have died of AIDS and the loved ones they left behind that the Reagans had their backs. Anyone who knows anything about the issue knows better.

Clinton already has a mixed record on LGBT issues. She supported the Defense of Marriage Act until it was politically inconvenient. And it wasn’t until 2013 that she fully supported marriage equality. This is just the latest problem with her commitment to the LGBT community. It’s not that they’re going to vote for a Republican, but she risks alienating them to the point that they may just stay at home in November.

You want to say something nice about Dead Nancy Fucking Dead Reagan on the TV? Compliment her taste in china. Don’t go on television and lie about her and her husband’s homophobic, hateful, appalling, murderous record on HIV/AIDS. Just don’t.

I would prefer to see Clinton spell out exactly what the Reagans’ position on homosexuality and HIV/AIDS was — so the world knows it — and then explain precisely what she’s going to do to help those who are suffering from the disease and how she plans to win over an LGBT community that has suffered enough at the hands of the government.