John Burke, the founding pastor of Gateway Church in Texas, has written a book all about “near death experiences” — and how they point to the truth of the Bible. And it’s totally scientific, you guys. 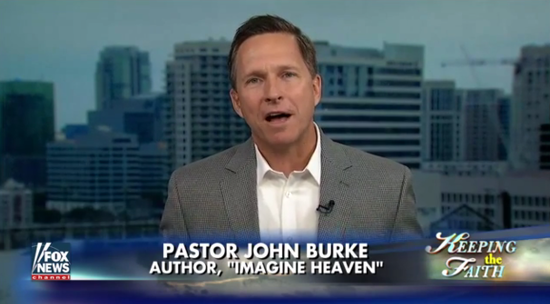 After researching nearly 1,000 accounts of people who died, were resuscitated, and lived to report a near death experience (NDE) of the afterlife, I wrote my book “Imagine Heaven.” In it, I showcase 120 stories that illustrate the commonalities of these accounts, correlating them with an in-depth look at the Bible’s picture of Heaven.

To be clear, they didn’t die. That’s the whole point of “near death” experiences. But is there any rational reason a lot of people who go through something like that would have biblical visions of Heaven?

Absolutely. It’s kind of like if I asked you to draw a picture of an alien.

What color would you use?

Probably green. And there would be some sort of antenna on the creature. Maybe a large head. Giant eyes, too.

None of this suggests aliens have any of these characteristics — or exist at all — but we all have similar ideas about what aliens look like. (Thanks, Hollywood.) If we were primed to think about aliens, there would be a lot of overlap in our imagination.

The same thing is true about death. A lot of people think about Heaven, and that means clouds, angels, wings, a tunnel of light, etc. Just because a lot of people “see” these visions says nothing about whether any of it is true.

But that’s exactly what Burke is suggesting in this book:

When I examined the similarities of the actual NDE reports across ages and cultures, they affirm each other and scripture. These are accounts told by surgeons, college professors, commercial airline pilots, bank presidents — people who have nothing to gain, but credibility to lose.

That’s also nonsense. Some of the people who give these accounts have plenty to gain, especially if they’re surgeons like Dr. Eben Alexander, who wrote a book about visiting Heaven, made a lot of money from it, and sold the movie rights as well. The book’s selling point was that Alexander wasn’t some uneducated yokel; he was a scientist! (His narrative was later debunked.)

Sick kids, too, stand to gain a lot from their overactive imaginations if it confirms a biblical account of Heaven. A dying child who confirms the majority’s faith? How much more can you tug a person’s heartstrings?!

And guess what? The author of one of those books, Alex Malarkey, admitted last year that his account was pure fiction, writing in an open letter that “I did not die. I did not go to Heaven. I said I went to heaven because I thought it would get me attention.”

Malarkey, by the way, doesn’t warrant a single mention in Burke’s new book, according to an Amazon search of its contents. He gets an indirect mention in the introduction, but only when Burke dismisses his story as if it’s a fluke. Eben Alexander is mentioned, of course, but you wouldn’t know his story’s been discredited.

Burke is a Christian pastor, so none of this is surprising. He doesn’t win any bonus points from his congregation (much less a book deal) for telling the truth. His job is to confirm whatever Christians already believe.

Makes you wonder what his “research” of 1,000 near death experience accounts actually looked like. It’s not research if all you do is accept whatever bullshit stories people tell you.

January 10, 2016
Philadelphia Mayor Claims That Wannabe Cop Killer's Motive Has Nothing to Do With Islam
Next Post

January 10, 2016 Three Reasons the Bible Is Not the Inerrant Word of God
Browse Our Archives
What Are Your Thoughts?leave a comment