Three Reasons the Bible Is Not the Inerrant Word of God January 10, 2016 Hemant Mehta

Three Reasons the Bible Is Not the Inerrant Word of God

This is a guest post written by Richard Hagenston. Hagenston is an ordained United Methodist minister, a former pastor, and the author of Fabricating Faith: How Christianity Became a Religion Jesus Would Have Rejected.

The view that the Bible is the perfect word of God is one that’s commonly held by Christians… but demonstrably false.

I have such great interest in the Bible that I have devoted much of my life to studying it. But revealing it as the imperfect text it is has become especially important because of the many efforts to use the idea of biblical inerrancy to manipulate others in ways that are often against their best interests. 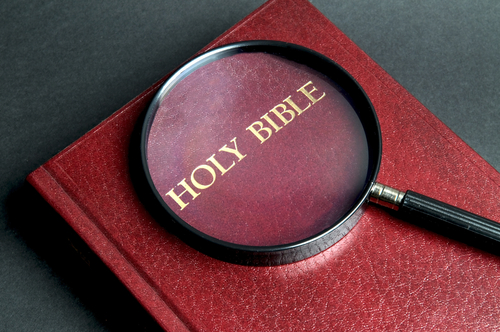 For instance, biblical literalist Ken Ham has used his view of Genesis to not only urge people to buy tickets for and otherwise fund his Creationist attractions in Kentucky but to discourage children from learning well-established ideas about evolution and the ancient age of the Earth, both of which are important foundations for success in scientific fields.

The same type of biblically based strategy has been used to challenge mainstream climate science. For instance, a few months before he died in 2007, Reverend Jerry Falwell gave a sermon saying that global warming is a myth. To back up his claim, he pointed to Genesis 8:22, which says that seedtime and harvest, as well as cold and heat, summer and winter will never cease. Of course, since that time, both scientific consensus and the increasing frequency of extreme weather events have made even more obvious that forceful action to limit climate change is critical to avoid huge and deadly societal disruptions.

And yet there are those, including some in substantial positions of influence such as Sen. James Inhofe (R-OK) and Rep. John Shimkus (R-IL) who still invoke the Bible to deny an obvious urgency on the matter — and even actively attempt to restrict research, funding, and other specific steps to address it.

And then we have Kim Davis, county clerk of Rowan County, Kentucky, who says it was by “God’s authority” that she refused to issue same-sex marriage licenses, implying inerrancy of her view of the Bible to seek support for her position. Standing with her on that point was presidential hopeful Mike Huckabee.

There is nothing new about claiming the authority of the Bible to demand acceptance of a personal opinion. For instance, in my own Methodist tradition, criticism of a Georgia slave-holding bishop at a conference in 1844 led to the formation of the Methodist Episcopal Church, South based on a belief that the Bible’s mention of slavery meant God supported slavery in the United States. A year later, the Southern Baptist Convention was formed with the same intent of using the Bible to justify slavery as God’s will. To this day Southern Baptists, even while insisting on biblical inerrancy, continue to wrestle with their denomination’s biblically motivated racist past.

That the Bible is divinely inspired is always seen as a given by these Christians. Left unspoken in all of this is the question of whether the Bible actually meets the test of being the inerrant word of God.

On several counts, it does not.

1) Even if There Once Was a Perfect Text, We Have No Way of Knowing What It Said

With regard just to the Hebrew Bible, what Christians call the Old Testament, translators have typically withheld from their readers the fact they are guessing about the meaning of a vast number of passages because of ancient copying errors or words not otherwise understood. And any hope that God is guiding the process is dashed by the fact that different translators have often made different guesses.

Very up-front about the problem is the English translation of the Hebrew Bible published in 1985 by the Jewish Publication Society. It has literally hundreds of pages with footnotes pointing out something on the page that is uncertain. Where the perfect word of God might be found in those hundreds of uncertainties is impossible to say.

As for the New Testament, Bible scholar Bart Ehrman has noted that the thousands of manuscripts that have been found have more discrepancies than there are words in the New Testament. That’s not quite as bad as it sounds, since many of those are obvious copying errors by weary scribes. However, there are still several substantial problems such as, depending on the manuscript used, the Gospel of Mark having three different endings. That is of practical significance since one of those, not found in the earliest manuscripts, says Jesus protects believers who drink poison and sanctions the handling of snakes. Trusting that as the word of God has led to painful deaths in churches that base their religious practices on that text.

2) God Would Presumably Have Gotten the Bible’s Stories Straight

It is rare to hear someone say that the parents of Jesus happened to be in Bethlehem for his birth because they already lived there and had a house there. But that’s what the Gospel of Matthew says, in contradiction of Luke’s story of a journey from Nazareth.

It would seem that if the Bible were a divinely inerrant text, God wouldn’t be inconsistent about which story is correct. And there is evidence from the Bible that neither is. Even after having had the opportunity to learn everything he could about Jesus from those who had personally known him, such as the Apostle Peter and Jesus’ brother James, Paul gives no indication of having heard of a virgin birth or that the apostles of Jesus had either.

Instead, he opens his letter to the Romans by introducing Jesus as someone born of the flesh like all of us and declared the son of God only through his resurrection (Romans 1:3-4). That is just one of many aspects of the New Testament in which the pieces don’t fit as would be expected if it were the inerrant word of God.

Want an Old Testament example? Exodus 33:11 says that God spoke to Moses face-to-face as if to a friend. However, nine verses later we see that, no He didn’t, because no person can see God’s face and live. If the Bible really were the inerrant product of God, it would be remarkable if He couldn’t get straight a story especially when He’s a direct participant.

And as for the verses in Genesis that Creationists like to quote, they begin with light on the first day. But there are no sources of light — sun, moon, or stars — until the fourth day. Meanwhile, on the third day, plants are yielding seed and bearing fruit, presumably in total darkness (Genesis 1:1-19).

A great many more examples can be given in both the Old and New Testaments that reveal that the Bible has actually been assembled — sometimes very awkwardly — from the writings of human beings who had their own often conflicting stories and agendas.

3) A Book Truly Inspired by God Would Show Greater Morality

One common tenet of faith is the conviction that God is the ultimate authority for living a moral life. But in addition to lofty statements about love and forgiveness, the Bible also has several passages that are despicably immoral by any standard.

For example, look at Deuteronomy 22:28-29. It’s the Bible’s way of dealing with the crime of rape. And yet we see no community support for the victim and no punishment for the rapist other than a payment to the woman’s father. Even more outrageous is that the victim has to marry the rapist (with no divorce allowed), condemned to spend the rest of her life with the man who violated her.

Those who criticize some other religious traditions for their brutality should look at Deuteronomy 25:12: “you shall cut off her hand; show no pity.” Those and other examples such as Psalm 137:9 which says, “Happy shall they be who take your little ones and dash them against the rock!” reveal in the Bible the hand only of human beings expressing the coarsest aspects of their nature.

None of this changes the fact that many people find deep meaning in some parts of the Bible. I am among them. Still, that does not justify the selective choosing of certain passages as a way to lend divine credibility to your own opinions. It’s time to end that practice, and it’s well past time to refuse to be manipulated by those who continue to do it.