This is Why I Joined the Church of Scientology as a Teenager January 4, 2016 Hemant Mehta

Chris Shelton spent 27 years in the Church of Scientology before finally coming to his senses and leaving. It’s been three years now since he left and he’s doing everything he can to make sure no one else makes the same mistake.

His new book detailing his experience within the organization is called Scientology: A to Xenu: An Insider’s Guide to What Scientology is All About: 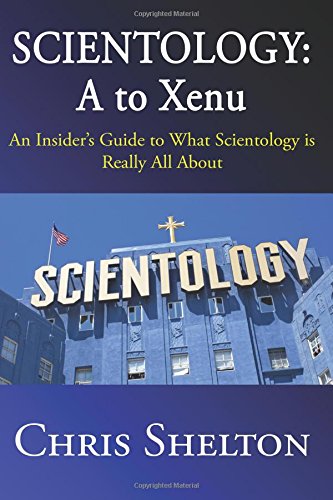 In the excerpt below, Shelton talks about what drew him to the Church in the first place:

So when I was 15 years old, during the summer between my sophomore and junior years, my Dad suggested out of the blue that I go down to the closest Church of Scientology, which was about an hour’s drive away in Santa Barbara. A young co-worker at my Dad’s company, the son of my Dad’s business partner, in fact, was going down on Monday and Tuesday nights and all day Sunday taking classes and he could drive me down with him. So it was I ended up in front of Lynn, a gorgeous blond who worked the front desk at the Santa Barbara church, who reeled me in like a fish.

The personality test, or more officially the “Oxford Capacity Analysis,” is one of the primary means Scientology uses to sucker people in to take services. It consists of 200 pretty odd questions which they use to graph your personality and tell you about yourself. There are questions such as “Do you sleep well?” or “Do you spend much time on needless worries” or “Do you browse railway timetables, dictionaries and such just for pleasure?” It’s basically one step up from a total cold reading (the kind psychics do) in that you have given them some information about yourself and then they go over the results with you and get you to tell them even more about yourself. The whole point is for you to open up and tell them what it is about yourself you want to change or improve. This is called your “ruin”. They then use this information to sell you any beginning Scientology which you think will help you with that problem. Once you have your foot in the door, it’s then a matter of keeping you in with service after service, all costing progressively more money the further along you go.

Me being who and what I was — a shy, introverted 15 year old who could barely look at people when I was talking to them, especially if they were pretty — I was putty in Lynn’s hands. She told me what I already knew about myself but couldn’t believe she somehow magically found out. When she said I had a problem with girls, but they had a way of solving that problem for me, it was like the Second Coming of Christ. The clouds parted, the angels sang and I swore I could see an angelic halo around her face. I just about fell out of my chair, because it was inconceivable to me I would ever be able to overcome my awkwardness or figure out how to ever get a date.

Lynn assured me all that and much more was possible if I did their communications course. I couldn’t sign up fast enough.

Was I a stupid person? No, I wasn’t. I was quite smart actually and got good grades and even at 15 years old, I knew a lot of things. I wasn’t stupid but I was naïve and reckless. I didn’t know con men really existed, people can lie without knowing they are lying and just because someone says they are your friend, doesn’t make it so. If I have any “weakness” in my life, it’s my trust and optimism. Even after everything I’ve been through, I still believe people are basically good and are worthy of my trust before they prove me wrong. Of course, that is now tempered by all my experience so I’m no fool anymore but back then, yeah. I was a fool. I was also desperate to be thought well of and I would do anything, repeat anything, to be popular.

The communications course did help me overcome my shyness and I was able to start talking to girls. What I said to them was not any better, though, and this class did not really help me to become more popular or get any more dates than I had before. What it did do is help me become a little bit more self aware though. I stopped dressing like a total nerd and I walked with my head a little higher and I felt a bit more confident. My friends noticed this and remarked on it and that was all the proof I needed Scientology indeed could work miracles.

That’s from the opening pages of a nearly 300-page book. Lots of details for anyone who wants to know what the Church is like from the inside.

Scientology: A to Xenu is now available in paperback and as an ebook.

January 4, 2016 Meat Processing Plant Fires 190 Muslim Employees Over Prayer Dispute
Browse Our Archives
What Are Your Thoughts?leave a comment