A meat processing plant in Fort Morgan, Colorado has fired around 190 Muslim workers, mostly Somali immigrants, after they walked off the job, protesting that the employer wouldn’t allow them time to pray. 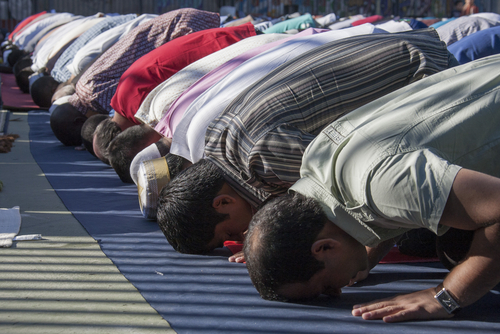 The strike at Cargill Meat Solutions began on December 21, a few days after employees were allegedly told by a supervisor, “If you want to pray, go home.” After three consecutive days of not calling or showing up, strikers were fired. The workers are being represented by the Council on American-Islamic Relations (CAIR) in an effort to negotiate their jobs back and waive the company’s policy of not rehiring any terminated employee within six months of departure.

Jaylani Hussien, a spokesman for CAIR, explained how the workers felt when told they’d have to go home and pray:

They feel missing their prayer is worse than losing their job. It’s like losing a blessing from God.

The company provides the employees with a “reflection room” for the purpose of praying within their allotted breaks. The problem from the employer’s standpoint seems to be when everyone wants to go at the same time.

Cargill claims they make a “reasonable attempt” to accommodate the religious practices of its employees while trying to balance running an assembly line. This means that not every employee is guaranteed prayer time every day.

At no time did Cargill prevent people from prayer at Fort Morgan, nor have we changed policies related to religious accommodation and attendance. This has been mischaracterized.

Some of what is being said by Cargill seems contradictory — they claim at no time were people denied prayer, but also state they can’t allow everyone to pray every day. Obviously something must have changed to cause employees to suddenly walk off the job — some of whom have been there since 2009.

It’s an unfortunate situation that may be based somewhere in a misunderstanding. But the policies have been in place, and we go over the policies for all people who are newly hired to the company when they are hired.

There has been a desire among some employees to go in larger groups of people to pray. We just can’t accommodate that. It backs up the flow of all production. We’re a federally inspected, USDA inspected plant. We have to ensure food safety. We have to ensure products we produce meet consumer expectations.

Hussien is optimist that he’ll be to work toward an agreement:

I’m confident in our upcoming negotiations that we can come to a resolution.

It’ll be interesting to see what a negotiation means when the central issue, prayer time, is non-negotiable to the Muslim workers.

January 4, 2016
This is Why I Joined the Church of Scientology as a Teenager
Next Post