Once Again, a Red-Stained Communion Wafer Turns Out Not to Be a Miracle After All December 18, 2015 Hemant Mehta

Once Again, a Red-Stained Communion Wafer Turns Out Not to Be a Miracle After All

For weeks now, the Catholic Diocese of Salt Lake City has been investigating a possible “miracle.” A consecrated communion wafer apparently began “bleeding” in water following a Mass and surely this was a sign from Jesus! 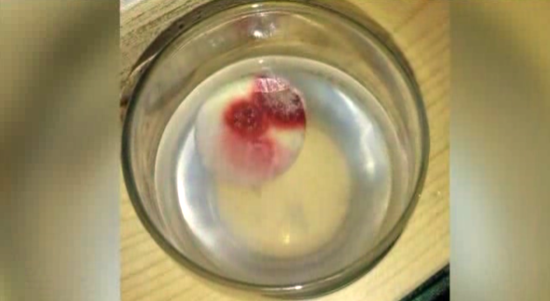 Recently, reports of a bleeding host at St. Francis Xavier Church in Kearns have been circulating within the diocese. Monsignor Colin F. Bircumshaw, Diocesan Administrator, has appointed an ad hoc committee of individuals with various backgrounds to investigate the matter. The work of the committee is now underway. The results will be made public.

Whatever the outcome of the investigation, we can use this time to renew our faith and devotion in the greatest miracle — the Real Presence of Jesus Christ that takes place at every Mass.

Before we get to the results of the investigation, let’s take a trip back in time… since this exact same thing has happened before.

Ultimately, the explanation turned out to be perfectly rational:

The archdiocese sent the host to an unnamed laboratory to be tested and released the results Wednesday in a statement from archdiocese spokesman Dennis McGrath.

“Exhaustive biological analysis by an independent scientific laboratory has determined that the reddish coloration on the Holy Communion host fragment that was kept in a water solution after it was discovered on the floor of St. Augustine Church … was caused by a fungus. The host in question has been disposed of in a manner prescribed by church law.

“While the Catholic Church fully recognizes the possibility of miracles and remains open to their possibility, it does so with extreme scrutiny, investigation and care. This incident was the result of natural biological causes and should not be considered in any other way.“

And yet, when the same potential “miracle” took place at St Patrick’s Catholic Church in Rochelle, Illinois earlier this year, believers jumped right to the “flesh and blood” explanation.

So back to what’s happening in Salt Lake City. The Diocese completed its investigation and… guess what?

In November of 2015, it was alleged that a consecrated host (communion bread wafer) from Saint Francis Xavier Church in Kearns, Utah, appeared to be bleeding. A thorough investigation has concluded that the host did not bleed, but the change of appearance in the host was due to red bread mold.

Who saw that coming?

No one. No one at all. Total shocker.

Moral of the story: Assume the rational explanation first.

(Image via KSTU-TV. Thanks to Kyle for the link. Portions of this article were posted earlier)