Over the past month, three city council members in China, Texas have resigned from their positions, leaving the city unable to proceed with business because there aren’t enough elected officials to reach quorum.

What prompted them to step down?

They’re supposedly angry at Mayor John Walker for not asking their permission before approving an event in city hall aimed at dispelling myths about atheists and church/state separation: 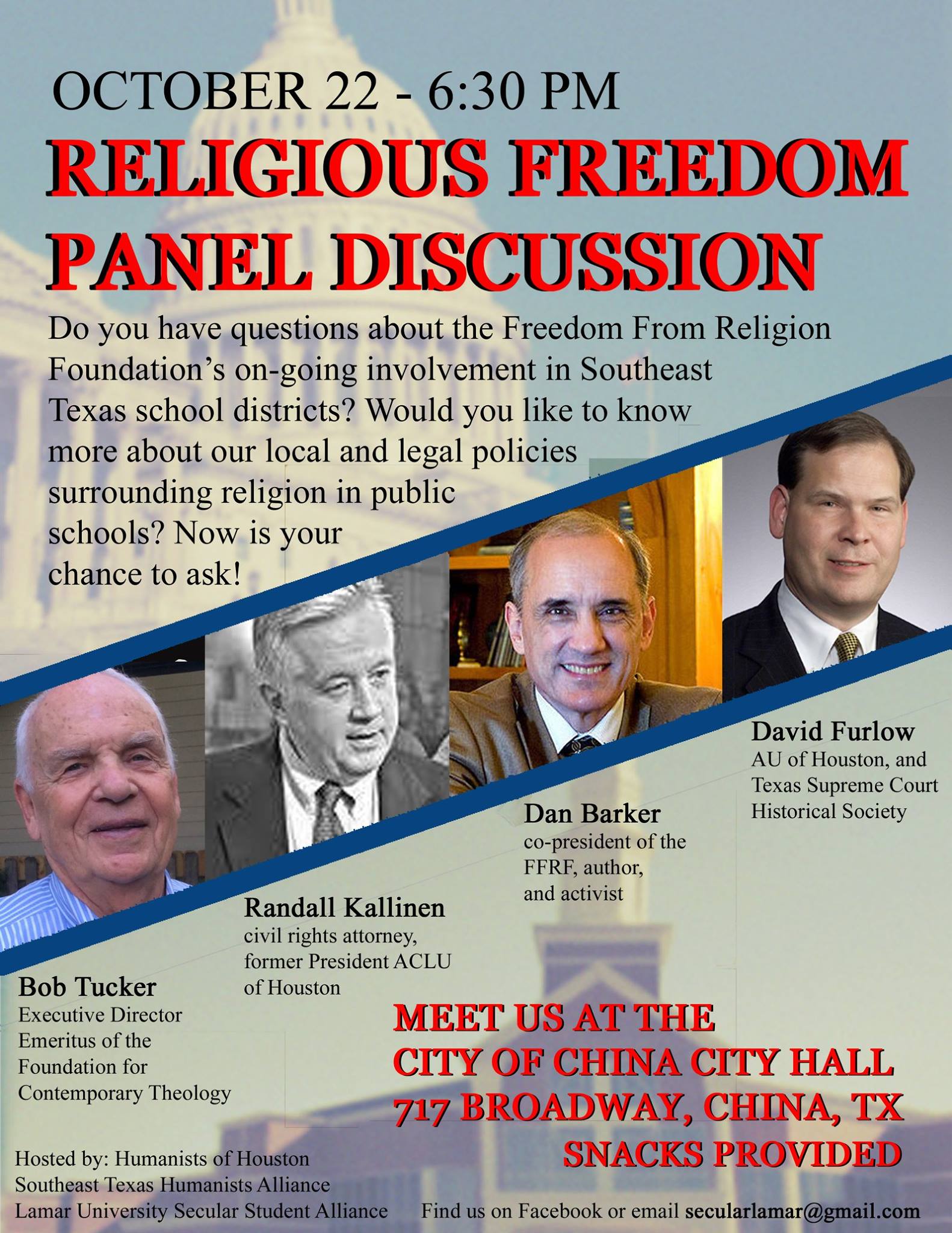 [Walker] says without Richard Garner, Stan Price and Sheila Scott there is no quorum, which means no official business can be conducted.

Walker says the main reason they resigned is because he allowed the Freedom From Religion organization to hold a public forum at city hall in October.

Walker says if any of the council persons haven’t fully resigned their seat, a special election can be called at a meeting tonight. Otherwise, it will be up to Jefferson County Commissioners to call a special election.

What’s amazing is just how harmless this discussion was. The October 22 event was all about explaining the concerns of church/state separation groups in an area where there have been a lot of First Amendment violations — and a lot of misconceptions about what the battles were really about. (Do the atheists just hate Christians? Are they trying to take prayer out of school? Why don’t they love freedom? Etc.)

In other words, this wasn’t a “pro-atheist” event at all; hell, there was even a former minister on the panel! This was an event designed to clear up confusion, and citizens were invited to attend and ask questions.

You can watch video of the event below. See if you can spot any attempts at atheist indoctrination.

Amber Barnhill, the atheist who planned the event, said that the planning had begun months prior to the event and there were signs all over city hall and the city’s social media pages. If all those council members missed it, it’s because they weren’t paying attention.

More importantly, Barnhill did everything by the book. She requested the space and was approved for it, just as any other group would have been. There’s no reason the Mayor would have needed to ask permission from city council members before saying yes to this forum. (It’s not like he could have said no even if he wanted to, since citizens have a right to use the space.)

One of the now-former council members Richard Garner posted on Facebook that he didn’t resign because of the forum, but because the mayor has been doing a lot of other things he didn’t approve of. Garner also said the mayor allowed Barnhill to have the city hall space for free even though there was a policy requiring groups to pay for the space.

If that’s the case, then at least that’s worth discussing, but quitting en masse seems completely overblown.

Garner discredits himself later on, though, when he writes:

… the Mayor caused the City to violate the law of Separation of Church and State. In 1961 the Supreme Court ruled that atheism and humanism is a religion. John Walker allowed this religious group to come into a government building(our City Hall) and preach their doctrine. I thought we elected a Mayor, John thinks we elected him King, because he has no regard for the authority of the City Council.

All of that, of course, is the sort of bullshit conservatives Christians tell each other to feel better about themselves. The Supreme Court didn’t say atheism or Humanism was a religion, this wasn’t a “religious” group allowed in the building, it wouldn’t have been a problem even if it was since all groups have access to the city hall space, and there was no “doctrine” being “preached.”

If Garner is that ignorant, let’s be glad he’s no longer on the city council.

Maybe with him and his two colleagues no longer in elected office, the city of China can replace them with some level-headed thinkers instead.

Am I allowed to nominate Amber Barnhill?

December 18, 2015
Illinois High School Football Coach Promises Not to Lead or Participate in Prayer with Athletes
Next Post