Earlier today, researcher Miguel Antonio Fiol announced a discovery. And why go through the hassle of getting published in a peer-reviewed journal when you can just purchase a press release?

Fiol says that you can see the crucifixion of Jesus in the planetary alignment from 33 A.D., the year Jesus supposedly died. 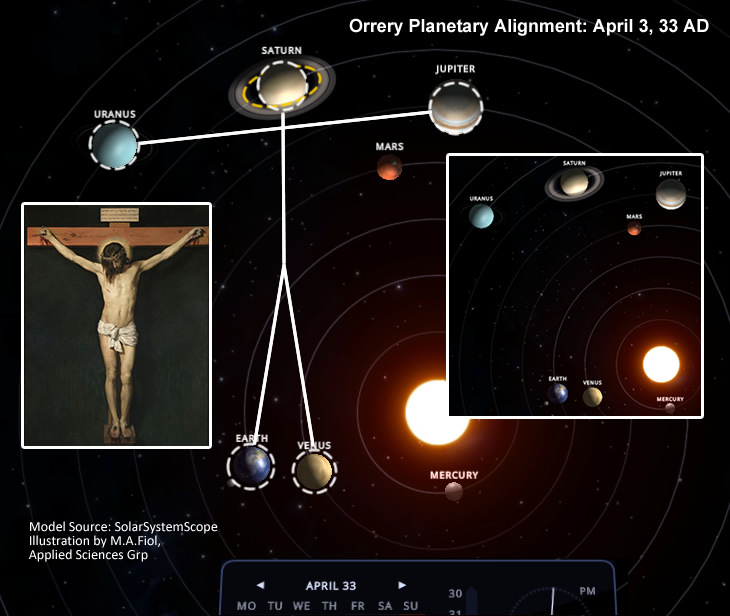 “Even at first glance I knew it looked like the crucifixion,” he adds. “But it took time to uncover all the incredible parallels.”

Beyond appearing like the crucifixion, Fiol says other notable findings include:

• The “crown of thorns” (or “halo”) is represented by Saturn’s rings.

• The alignment began in mid-March and lasted through mid-April of 33 A.D.

• Alignment appeared previously in the year 4 B.C., regarded by some scholars as the year of Jesus’ birth.

• Fiol says the alignment appears to have occurred only six times between the year 0 and 2000 A.D., equivalent to once every 333 years.

• Drawing a direct line from Jupiter through Mars to the centerline yields an accurate point for the “waistline.”

• Most notable finding perhaps is that the two “hands,” Uranus and Jupiter, spin in opposite directions as do the two ‘feet,’ represented side-by-side by the planets Earth and Venus.

I guess it all makes sense now…

Even though I could take the same hypothetical planetary alignment, connect the dots in a new way, and get a very different message: 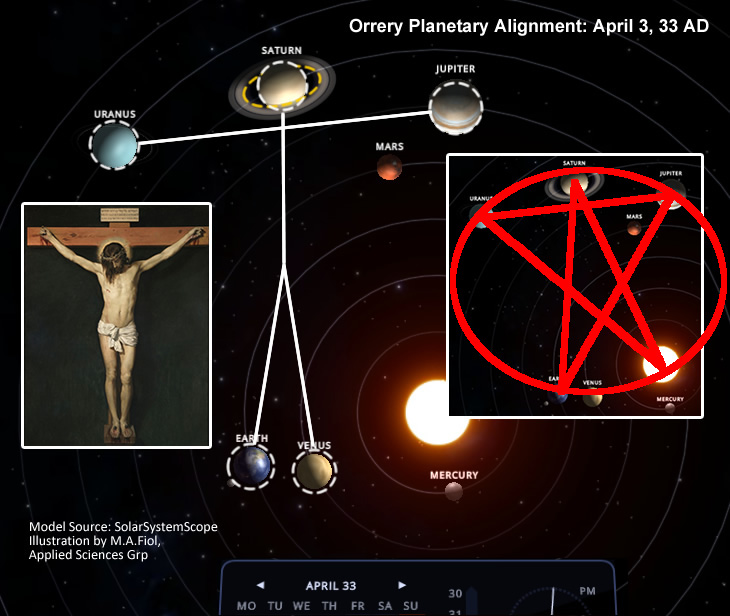 (In a similar story, a few years back, Pastor Louie Giglio “found” that the laminin molecule in our bodies resembled a cross. Even though a T-shape is found regularly in the biological world and can be naturally explained by chemical bonds. Some people will grasp at straws.)

I told Fiol that his “discovery” seemed purely coincidental.

He responded, “… there are only 8 ‘dots’ in our solar system and five of them just happened to form a cross on that date?”

To which I say: Yes. That’s how 8 dots work. It’s hard to plot 8 dots randomly and not be able to draw a halfway-decent cross in them.

This is no better than Jesus showing up on grilled cheese. There’s nothing there, but some people are just inclined to find “signs” anywhere they can.

(Thanks to Kyle for the link. I have removed the phrase “major scientific” describing the discovery from the first line because that gave some readers the wrong idea and overstated Fiol’s own words.)

August 31, 2015
Appeals Court Rules That "Big Mountain Jesus" Statue in Montana Is Not Religious
Next Post