***Update***: FFRF says it will ask the entire Ninth Circuit to re-hear the case in what’s known as an en banc review.

FFRF Co-President Annie Laurie Gaylor called it “phony” and a “sham” to pretend that a “giant Jesus” is secular, thereby ignoring the Knights of Columbus’ stated purpose. The Catholic men’s club has “leased” at no cost the prominent parcel of land on the federal ski slope to display its Catholic shrine. “That means federal taxpayers are subsidizing religious speech, in this case Catholic,” Gaylor said. She added that devout religionists should be offended at a decision that purports that a sacred image of a god is not religious.

If you were to go skiing at Whitefish Mountain Resort in Montana, a resort on land owned by the U.S. Forest Service (USFS), you might come across a statue known as “Big Mountain Jesus”: 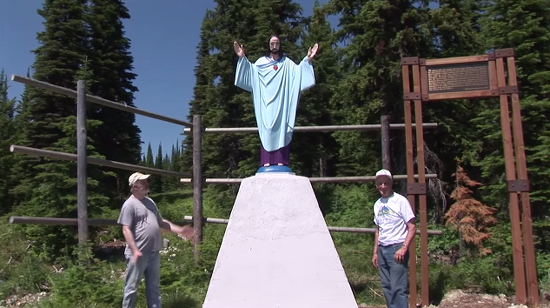 The reason that statue is allowed to be on the property is because the USFS gave the Knights of Columbus a “Special Use Permit” in 1953 to build and maintain a memorial to honor WWII veterans. However, the Knights decided to build Big Mountain Jesus because “veterans from the 10th Mountain Division… wanted to commemorate their fallen comrades with a statue that evoked memories of the many religious shrines and statues they had seen in the mountain communities of Europe.”

That’s convenient, isn’t it?… We didn’t intend to build a statue to Jesus. The veterans requested it!

In any case, it’s been up there for about 60 years. There’s no doubting the religious significance of it, since people have held church services and weddings near the statue.

That’s why the Freedom From Religion Foundation filed a lawsuit to take down the statue in 2011, claiming it represented an establishment of religion by the government.

In 2013, a judge at a federal district court in Montana issued his decision: Jesus could stay put:

To the extent Big Mountain Jesus may have had some religious significance at the time of its construction by the Knights of Columbus, and may have provided from time to time spiritual inspiration or offense to some, over the course of the last 60 years the statue has become more of an historical landmark and a curiosity.

The government neither owns the statue nor exercises control over the property on which it is located. Big Mountain Jesus constitutes private speech reflecting the personal views of its private owners and therefore cannot be seen by the reasonable observer as reflecting government promotion of religion.

In summary, the Court finds that the USFS renewed the Special Use Permit because the statue is steeped in the origins and history of Big Mountain and the surrounding community, which constitutes a legitimate secular purpose.

In other words, the statue of Jesus has historical significance… even though a religious organization put it up for religious reasons and it’s a goddamn giant statue of Jesus. The judge even said, “Unquestionably, Big Mountain Jesus is a religious symbol commonly associated with one form of religion.”

I guess none of that mattered.

FFRF tried to argue against that whole “tradition” point in 2011:

“This has been an illegal display. The lease should have never happened,” [FFRF co-president Annie Laurie] Gaylor said. “Just because a violation is long-lasting doesn’t make it historic. It makes it historically bad. It makes it worse. It makes it all the more reason to get rid of it.”

Even if there’s a legal precedent to this, it makes little sense to me. Just because something has been around for a long time doesn’t make it okay. Just because no one complained about it before doesn’t mean it wasn’t worth complaining about.

Gaylor, in response to the ruling, was stunned at the time:

“The judge said the statue has no religious purpose, but the Knights of Columbus said they put it up to erect a shrine,” Gaylor said. “He turns the First Amendment on its head to claim a Jesus statue is not religious.”

“I couldn’t be more disappointed in an Obama appointee,” Gaylor said. “He might as well be a Bush appointee.”

Simon Brown of Americans United for Separation of Church and State said the obvious when the lawsuit was initially filed, but it held true even after the decision was handed down:

“If the Knights of Columbus really want[ed] to honor veterans, they [would] respect the principles of the Constitution that those veterans fought for and move the statue.”

In any case, FFRF appealed the ruling. And today, unfortunately, the Ninth Circuit Court of Appeals (normally a good place for liberals) affirmed the earlier decision in a 2-1 split:

Our determination is based on the following: (1) there is nothing in the statue’s display or setting to suggest government endorsement; the twelve-foot tall statue is on a mountain, far from any government seat or building, near a commercial ski resort, and accessible only to individuals who pay to use the ski lift; (2) the statue’s plaque communicates that it is privately owned and maintained — “it did not sprout from the minds of [government] officials and was not funded from [the government’s] coffers”… (3) besides the statue’s likeness, there is nothing in the display or setting to suggest a religious message. The mountain’s role as a summer and winter tourist destination used for skiing, hiking, biking, berry-picking, and site-seeing suggests a secular context; the location “does not readily lend itself to meditation or any other religious activity,” and the setting “suggests little or nothing of the sacred”… (4) the flippant interactions of locals and tourists with the statue suggest secular perceptions and uses: decorating it in mardi gras beads, adorning it in ski gear, taking pictures with it, high-fiving it as they ski by, and posing in Facebook pictures; (5) local residents commonly perceived the statue as a meeting place, local landmark, and important aspect of the mountain’s history as a ski area and tourist destination; and, (6) there is an absence of complaints throughout its sixty-year history…

The one dissenting judge, Harry Pregerson, couldn’t believe what his colleagues were saying:

… despite arguments to the contrary, a twelve-foot tall statue of Jesus situated on government-leased land cannot realistically be looked upon as “predominantly secular in nature.”

I submit that a “reasonable observer would perceive” the statue situated on government land “as projecting a message of religious endorsement.”

The faith-based Becket Fund is thrilled with the victory.

FFRF has the option of asking the entire Ninth Circuit to review the case, but first, they’ll have to weigh the financial costs of a case that doesn’t necessarily have larger implications.

(Image via YouTube. Large portions of this article were published earlier)

August 31, 2015
A Christian College President Resigned Due to "Health Concerns"; He Was Actually Caught Having an Affair
Next Post