A Creationist’s Desperate Attempt to Sound Like a Credible Scientist December 12, 2013 Hemant Mehta

A Creationist’s Desperate Attempt to Sound Like a Credible Scientist

I almost feel bad for Creationists. They try so hard to be credible but their explanations too often hit a wall of reality and they’re forced to find a way around it without sounding like crazy people. It never works, of course.

Just take a look at this new “research” paper put out by Nathaniel T. Jeanson of the Institute for Creation Research. Jeanson is a Harvard Medical School graduate who seems to knows how evolution works… but actively denies its truth. What’s shocking is that he acknowledges the strength of evolution (with references to published scientific papers)… and then tosses in references to the Bible to make his paper worthless. 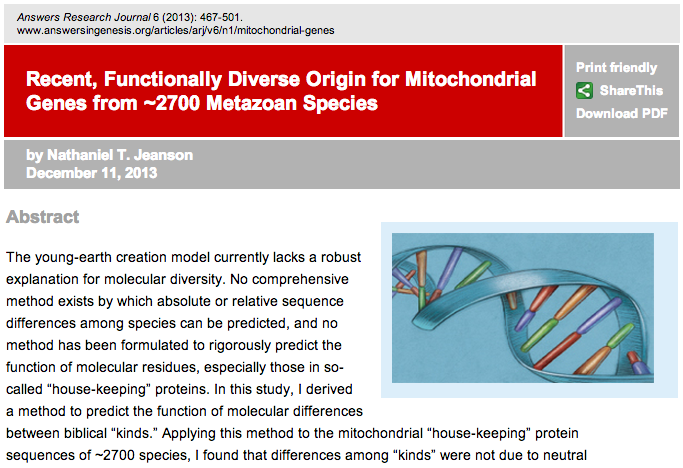 The evolutionary model is so robust that it leads to predictions of molecular function. Under the assumptions of this model, species will grow more and more distant molecularly over time, unless some natural force constrains random variation. For proteins that have evolved differences rapidly, evolutionists predict that these proteins have fewer functional constraints than proteins which have evolved differences slowly (Futuyma 2009).

This conundrum intensifies when considering hierarchical sequence patterns. For example, different species of Drosophila are more genetically distant from one another (Drosophila 12 Genomes Consortium 2007) than humans and chimpanzees are from one another (again, debates over the precise sequence identity notwithstanding [Bergman and Tomkins 2012; The Chimpanzee Sequencing and Analysis Consortium 2005; Tomkins 2011; Tomkins 2013; Tomkins and Bergman 2012; Wood 2006a]). Yet, the Drosophila species likely share a common ancestor since they belong to the same biological family (Wood 2006a), whereas humans and chimpanzees clearly have separate ancestries (Genesis 1:26–28). Why would differences between the related species exceed differences between unrelated ones?

All throughout the piece, Jeanson tries to fit the square peg of the Bible into the round hole of science, even when it makes no sense whatsoever:

First, molecular diversity must be explicable on a relatively short timescale — several thousand years. This is seen clearly in Genesis 1. The text describes a literal, six-day Creation week that includes the creation of biological organisms on Days 3, 5, and 6, and the date of this Creation week is around 6000 years ago according to the genealogies of Genesis 5, Genesis 11, Matthew 1, and Luke 3. The Creation week cannot have occurred more than 12,000 years ago (McGee 2012). Thus, any biblically consistent model of genetic differences must conform to a recent time frame (thousands, not millions, of years).

He’s right: Any biblically consistent model of genetic differences for him has to conform to young earth Creationism.

Any *actually* consistent model would do no such thing…

At one point, Jeanson damn near gives up trying to explain anything:

A third explanation might also be true. God may have created genetic diversity simply for aesthetic reasons. However, testing this hypothesis is nearly impossible at the present.

Oh, have I mentioned that Jeanson has his own commercial?

Back to the paper: At one point, Jeanson performs analysis in a “more rigorous mathematical manner”… a manner that includes addition, substitution, and factoring, the kind of math I’m teaching my high school sophomores: 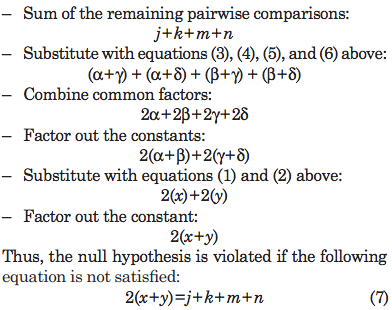 Remember back in college when you would write essays by throwing in big words and “sounding” smart? (Every good professor saw right through it.)

Well, that’s how you confuse Creationists. Throw in a few equations and watch them be amazed…

One final note: Jeanson, like all Creationist “researchers,” does no actual research. There are no experiments. No laboratories. No science. Only spinning the work of real researchers just enough to confuse people like Ken Ham into thinking you’ve discovered something notable.

There’s a reason this paper was published in the Creationist Answers Research Journal instead of anywhere reputable: No one else would ever accept such tripe.

December 12, 2013
An Intimate Conversation with George Carlin
Next Post