Ex-Mormon Michael Amini can set this one up:

The Mormon temples are considered the most sacred of spaces on Earth. Within the temples, several “saving ordinances” are performed, which are required to enter the highest levels of the Celestial Kingdom, including the Endowment and marriage sealings. It is a significant breach of Mormon law to discuss details of the temple ceremonies outside of the “Celestial Room” within the temple, and the church defends the secrecy of these details passionately, claiming that they need to be confined within the temple due to their highly sacred nature.

Which is why it should make for interesting television when HBO’s Big Love shows these ceremonies in next Sunday’s episode. You can read about it in TV Guide (PDF):

… “We researched it out the wazoo,” says [executive producer Mark] Olsen, who along with executive producer Will Scheffer hired an ex-Mormon consultant to help the set and wardrobe designers re-create even the tiniest details. “We go into the endowment room and the celestial room [areas of the temple], and we present what happens in those ceremonies. That’s never been shown on television before,” says Olsen. Adds Scheffer, “But it’s not for shock value. It’s really a very important part of the story.” The decision won’t be without controversy: According to a church insider, “If they are in fact trying to emulate those rooms in any way, that would be extremely offensive. The general public is not allowed in our temples yet. Not even all Mormons are. We consider them very, very sacred.” Heaven help us.

The promo picture is definitely intriguing. I’m never seen the show before but I think I should start…: 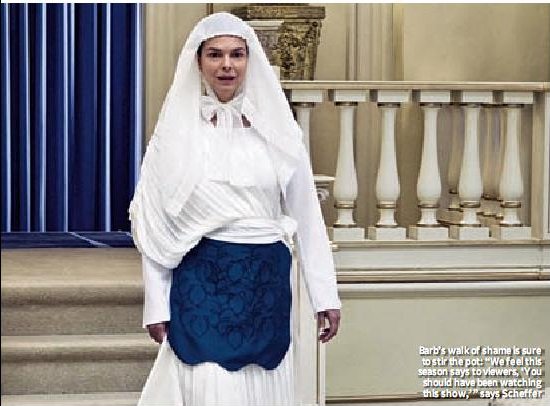 So I haven’t been keeping up with this show… but I imagine a lot of Mormons don’t like it because it portrays an aspect of Mormonism (polygamy) that many of them don’t subscribe to. But it seems like they still do take part in these ceremonies.

I have lots of questions about this whole thing:

Will there be an uproar over these ceremonies being broadcast (even when it’s just part of a fictional show and not some actual documentary)?

Is anyone ashamed of something that is actually happening in the lives of Mormons? Is that a good reason for these ceremonies not to be broadcast?

What the hell actually goes on in these ceremonies that I’m not allowed to see? Wouldn’t it be better if these ceremonies were out in the open? It could clear up misunderstandings and allow us to critique what really happens instead of some false caricature.

Should showing the truth of what actually happens in a Mormon temple be considered offensive?

Are there any other equivalents to that outside religion? That is, things that actually go on that people are offended to see? Should their wishes be heeded?

***Update***: The Church of Jesus Christ of Latter-day Saints has responded to the publicity about the show:

… Certainly such a boycott by hundreds of thousands of computer-savvy Latter-day Saints could have an economic impact on the company. Individual Latter-day Saints have the right to take such actions if they choose.

The Church of Jesus Christ of Latter-day Saints as an institution does not call for boycotts. Such a step would simply generate the kind of controversy that the media loves and in the end would increase audiences for the series…

March 9, 2009 Atheist Bus Campaign in... Calgary!
Browse Our Archives
What Are Your Thoughts?leave a comment