The American Religious Identification Survey has released numbers for 2008 (previous surveys were done in 2001 and 1990).

The theme: Atheism is more popular than ever before, as is overall non-religiosity. Hallelujah!

Not just that, our numbers are up in every state! 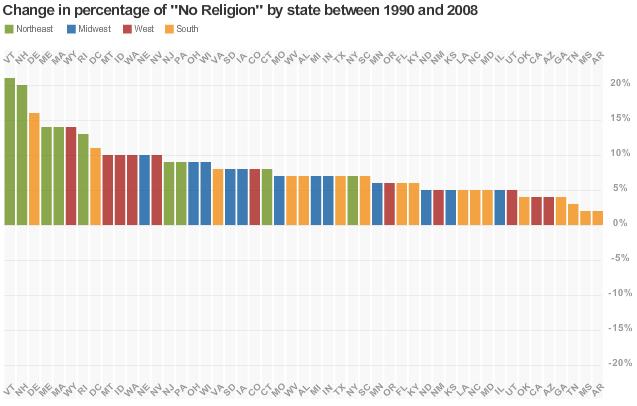 USA Today has fantastic graphics if you want to check them out. I love the bit where you can see the changes in percentage in each state from 1990 to 2008. Watch the circles grow for the non-religious!

What else have we learned?

Fifteen percent of respondents said they had no religion, an increase from 14.2 percent in 2001 and 8.2 percent in 1990, according to the American Religious Identification Survey.

Our numbers have doubled in nearly twenty years. I predict we’ll see that number grow for another 10-20 years before it begins to drop or stabilize.

So many Americans claim no religion at all (15%, up from 8% in 1990), that this category now outranks every other major U.S. religious group except Catholics and Baptists. In a nation that has long been mostly Christian, “the challenge to Christianity … does not come from other religions but from a rejection of all forms of organized religion,” the report concludes.

We have numbers. We need to begin effectively using that clout, especially politically.

Northern New England surpassed the Pacific Northwest as the least religious region, with Vermont reporting the highest share of those claiming no religion, at 34 percent.

“No other religious bloc has kept such a pace in every state,” the study’s authors said.

That’s fantastic news, though I suppose not all that surprising.

The current survey, being released Monday, found traditional organized religion playing less of a role in many lives. Thirty percent of married couples did not have a religious wedding ceremony and 27 percent of respondents said they did not want a religious funeral.

Ok, I am surprised by that. I’ve been to several weddings in the past year, all of which were religious. That’s a small, isolated sample, of course, but I didn’t realize nearly a third of weddings were not religious!

I’m clearly being invited to the wrong weddings.

The ARIS report should be out while I’m at work. Please let me know what other bits are interesting!

(Thanks to Karl and Matthew for the links!)